Subways and buses are packed

Subways and buses are packed

Gas prices have crushed our wallets all summer. And that’s why the bus and the subway are much more crowded. We got the latest numbers this morning from a public transit industry group called the APTA. More from Marketplace’s Janet Babin at North Carolina Public Radio.

Janet Babin: Public transit ridership is up more than 5 percent this year. All this train and bus hopping is directly related to high gas prices. APTA President William Millar says public transit systems have reached a tipping point. They can’t accommodate new riders without a cash infusion. But the housing crisis and credit crunch have state and local budgets tapped out. Millar says it’s time the federal government helped pay the bill.

William Millar: So that public transit systems can add service, to serve additional customers who are looking to beat that high cost of gasoline.

Millar says when people use public transit, our air is cleaner and there’s less congestion. He’ll make the case to a Senate committee today that these benefits deserve federal dollars. 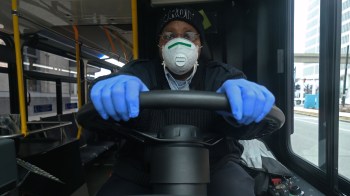