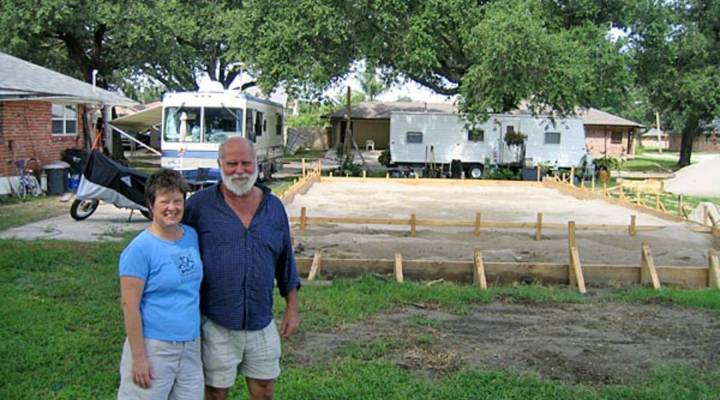 COPY
KC King and his wife Kathi on their property in the Gentilly neighborhood of New Orleans. Tess Vigeland / Marketplace

KC King and his wife Kathi on their property in the Gentilly neighborhood of New Orleans. Tess Vigeland / Marketplace
Listen Now

TESS VIGELAND: During my visit to New Orleans a few weeks ago I found that one big financial decision that homeowners are still facing is how to rebuild in a flood zone.

K.C. King and his wife, Kathi, are still living in the 30-foot RV they bought three years ago. That’s when Katrina chased them out of their 1,900-square-foot ranch house in the Gentilly neighborhood of New Orleans. Now the RV rests on the land where that house used to be, next to a sticks-and-sand outline of what they hope will be their new home. Their FEMA trailer sits nearby.

The only thing that’s just like it was before the storm is their backyard.

VIGELAND: You’re living next to the canal?

The London Avenue Canal breached 400 feet from the Kings’ home. Lake Pontchatrain poured into their neighborhood, destroying hundreds of properties.

VIGELAND: So your house was fully underwater?

Since June of ’06 K.C. — a retired Boeing engineer — has been trying to figure out a way to rebuild to a level of safety he’s comfortable with. He’s required by the city and by his insurance company to build above what’s called base-flood elevation. That level is marked on an oak tree beside his property.

KING: First livable floor has to be above this.

VIGELAND: And how high is that here?

KING: About four feet. And that’s about sea level.

VIGELAND: But you’re planning to elevate far above this 4-foot level.

KING: Yeah, my standard is the high-water mark of Katrina, which is another 5 foot higher than that. So, 9 feet.

Nine feet off the ground.

But he says he can’t get any part of the project off the ground until he receives government funds to help pay for it. He’s expecting up to $30,000 in elevation grants from the Louisiana Road Home project — that’s the state’s main Katrina recovery program, funded by the federal government. He’s also expecting, possibly, another $30,000 in FEMA hazard mitigation grants.

He says he can’t — or he won’t — start rebuilding without that money.

The Kings aren’t the only ones elevating their home. But if you look around the neighborhood, what you see is a patchwork of safety decisions.

As we drove around Gentilly the issue became clear. You have a house 9 feet up next to a house rebuilt right on its old pre-Katrina foundation. And next to that . . .

KING: OK, now we come across our first modular house. This is 4 feet up, which is the minimum for the base-flood elevation to qualify for any kind of flood insurance.

So if you’re required to elevate in order to get flood insurance, how is it that so many people are allowed to rebuild at ground level? FEMA engineers came through and determined the extent of damage to each home after Katrina. If you had more than 50 percent damage, you were required to tear down your house, rebuild from scratch, and elevate.

If you had less than 50 percent, you could just strip it down to the studs and rennovate, which in most cases was vastly cheaper. It also meant that if your mortgage was already paid off, there was no one to require flood insurance. And the city was so desperate to get citizens back into the community, it allowed residents to appeal their damage assessments to get under the 50 percent cutoff.

And that is how Jack and Dorothy Quarles got to rebuild on their old slab. Their house is just two doors down from the Kings.

JACK QUARLES: We live about maybe a block-and-a-half from where the wall gave way on this canal. The wooden sections of the floor had floated up. There was mold all through the house. The neighborhood looked like a war zone.

Jack says the family did consider raising the home several feet off the ground. But elevating can tack up to $90,000 onto the cost of rebuilding, depending on the size of the house.

As we mentioned earlier, both the Louisiana Road Home project and FEMA have grants available to help defray that cost. But most homeowners are still waiting for that money.

And Dorothy Quarles says that’s why their new house sits right where the old one did.

Dorothy Quarles: I don’t have 100 percent confidence and I pray about it. But, you know, I don’t know. But I tell you this — if it floods again, you’re gonna have some people that are high up. But the other people aren’t gonna come back. They’ll be nice and high and dry in their houses but they won’t have any neighbors.

And that’s exactly the argument K.C. King makes when he accuses government officials of failing to provide a vision for rebuilding New Orleans. He says the haphazard manner in which homes are going up in flood zones, including those built on the ground — or “at grade” — could come back to haunt the city.

KING: I think the number of rennovated-at-grade houses is going to diminish the value of the neighborhood overall. People are going to come to this neighborhood and they’re going to see high ones and low ones and say, “This doesn’t look particularly safe.”

VIGELAND: Then let’s ask that question: “How safe is it here? Why are you building right here again next to the canal?”

KING: Uh, I believe that if I raise my house 9 feet, that I can evacuate, leave everything in the house, and it’ll be here when I come back.

KING: Yes, and this is why these incentives are so essential.

Financial incentives that are taking the long road to get to homeowners. In a moment, paperwork, delays, and the priority of fraud prevention.

Shirley Laska directs the Center for Hazards Assessment Response at the University of New Orleans. She’s what you might call an elevation specialist. And she’s worried that so many people are deciding to build right back on the ground where their homes were submerged after Katrina.

Shirley Laska: The delays have been really the death knell of a very successful elevation process. You have to elevate your house before you can repair it. And by delaying it for 2-1/2 to 3 years, and then some of the money will be delayed even longer than that, you’re asking people to just make ends meet until they can afford to get that house elevated. It really is asking too much.

It was certainly asking too much of Jack and Dorothy Quarles.

PAUL RAINWATER: People are having to make tough decisions.

Paul Rainwater is the executive director of the Louisiana Recovery Authority, which runs the Road Home program.

Rainwater: And so what we’re trying to do is put the financing piece of this together. But it is frustrating. It’s frustrating for everyone. I mean . . . but it is an opportunity to move forward.

Rainwater took over the authority about eight months ago after being appointed by the new governor — Bobby Jindal. Rainwater says he understands how, three years later, homeowners wonder why they’re still waiting for FEMA and Road Home money.

RAINWATER: Now look, I’m not, again, I’m not making an excuse for the bureaucracy. I didn’t design the program. I took over the program. And what we’re trying to do is lean it out as best we can and streamline it, and push things forward. I mean, my goal is — I have a contract that ends June of 2009 — our goal is to get money out to people as quickly as possible.

The Road Home program has $1.2 billion to hand out. As of mid-August of this year, officials say they’ve disbursed $139 million of that. But even if you’re approved for a grant, it doesn’t mean the money’s in your bank account.

Bert and Mary Swafford’s pre-Katrina home was swamped by the levee break at the 17th Street Canal six miles away.
In July of this year they moved into their new Mid-City home — 9 feet off the ground.

MARY SWAFFORD: We call the house Bateau Rouge because it’s this big, red boat that’s sailing above everything else.

Mary says there was no real debate about whether they would elevate the new house.

MARY SWAFFORD: We could have tried to fix our old home, but the financial burden of repairing the existing structure was far more than starting anew.

The Swaffords applied for a $30,000 Road Home elevation grant in September of 2006. They were approved in February of 2007. Mary has a four-inch stack of paperwork to show for her efforts, but they have yet to see a dime of that money. They got an SBA loan to build the house anyway. And they’re the only homeowners on their block to elevate.

MARY SWAFFORD: My immediate thoughts to that are, “Oh my god, how can you not raise your home? But then when I really think about everyone’s situation here in New Orleans, it’s expensive! The cost of building the foundation and the piers up 9e feet is almost $40,000. That was with nothing sitting on top of the piers.

BERT SWAFFORD: I feel some people may just have gotten frustrated with all the paperwork and all of the constant “You need this form — oh, wait, no, you need to talk to another person.” And after 4-5 months of that, they just gave up.

RAINWATER: Some of this is about accountability and the fact that Congress gave us this money.

RAINWATER: And so there are a lot of pieces to this to make sure that, you know, people are . . . they actually own the home, and that they are meeting the base-flood elevation.

VIGELAND: But do you think a 4-inch stack of papers is a little much?

RAINWATER: Well, it depends. If you’re the federal government, you want to see accountability at the end of this day.

To date the Road Home program has found 42 instances of suspected fraud.

Back in Gentilly, K.C. King repeats his accusation that community leaders have no real vision for post-Katrina New Orleans. And he’s worried that people who rebuild on the ground are basically giving up.

King: Here’s what I hear people say in the neighborhood. “Next time it happens, New Orleans won’t be worth a hill of beans, and I’m outta here. That is not what I would call long-term commitment to the community.