Site lets you peek at a startup’s future

Site lets you peek at a startup’s future

Kai Ryssdal: With the advantage of hindsight, it’s easy to say some of the startups in the dot-com boom obviously weren’t long for this world. Pets.com, anybody?

But what if investors could’ve predicted that before investing? And what if, back in 1998, you could’ve known that Google would one day rule the planet?

A company called YouNoodle says its new web application can help you do that.

Rico Gagliano: Back in 2007, YouNoodle CEO Bob Goodson noticed something disturbing: $67 billion was flowing into tech startups based solely on the calculations of human beings.

Bob Goodson: People meeting up in person and making decisions without the use of computers, which is really quite surprising because other industries which deal with risk have made use of computers.

Like the insurance industry, for instance. So today, YouNoodle launched the “startup predictor” for the tech industry. Users fill out a questionnaire about a startup, then an algorithm spits out what the company’s value will be three years from now.

Goodson: Factors regarding the team members, the advisors, financial factors and concept.

But computers are only really good at the first two: looking at the background of workers and managers and gauging how they’ll help or hurt a company. So, unlike the by-the-numbers insurance biz, Goodman doesn’t expect computer predictors to replace the tech industry’s human heart.

Goodson: In something like startup investment, there is a very personal element. Humans for a long time are gonna be much better at analyzing concepts, products…

Gagliano: Great, then I have to ask you: I have an idea for a website called “Get Back to Work” that would just be a splash screen with the words “Get Back to Work” on it that employers could email to employees who goof off on the Internet too much and we could sell ad time to temp agencies. What is your prediction on this?

Goodson: I don’t know if anyone would click the link.

Well, we’ll see what the startup predictor has to say.

In Los Angeles, I’m Rico Gagliano for Marketplace, and I’ll get back to you on that. 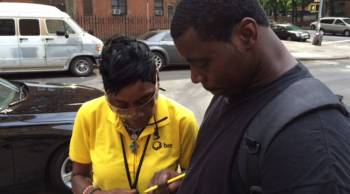