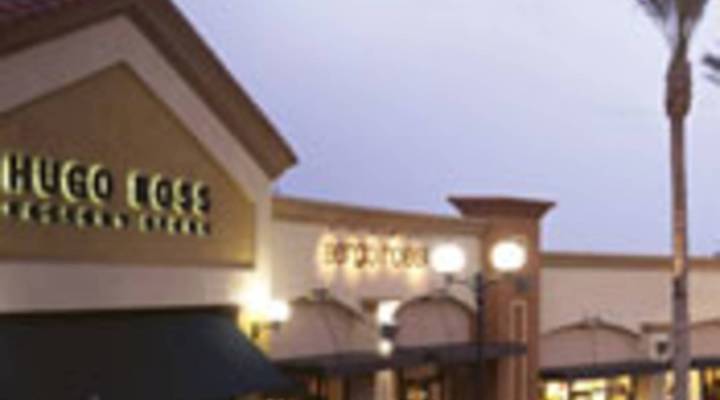 Kai Ryssdal: We get details tomorrow about the long hard summer retailers have been having. The Commerce Department’s set to release June numbers in the morning. But we don’t need statisticians to tell us that slower consumer spending is hurting everybody. And luxury retailers are finally feeling the pinch, because shoppers just aren’t so eager to shell out for that $300 Dolce and Gabbana blouse. But that doesn’t mean they won’t buy it. Stacey Vanek-Smith reports that these days, the devil wears discount.

Stacey Vanek-Smith: Outlet mall shopping used to be nothing short of a blood sport. Products wrestled from the arms of the weak. Fights erupting over scuffed Prada pumps from three years ago and shoppers desperate to find their very own brand-name buried treasure. That’s far from the scene at the Desert Hills Premium Outlet mall outside of Palm Springs.

At Saks Fifth Avenue’s Off 5th outlet store, designer jeans are fanned tastefully on a table, soft music plays and salespeople ask you if you need anything. Rob Wallstrom is the president of Saks Off 5th. He says this year the company hung up its clearance center image.

Rob Wallstrom: We really developed a modern luxury loft environment. We grew our fine jewelry department. You know, great denim department with premium denim. We put almost twice as many sales people in the store.

Marshall Cohen: So much of the upper-middle class has entered into the luxury market that is now not participating as much. The consumer who aspires and trades up is now not trading up as often.

But people are now buying luxury goods in the newly luxurious outlet malls. At Coach, sales dropped 1 percent last winter at the full-priced stores, but they were up more than 17 percent at factory outlets. Nordstrom sales fell 11 percent in the spring, but sales at Nordstrom Rack stores grew. Cohen says prices on the clothes may be going down, but the margins are going up for manufacturers like Donna Karen and Ralph Lauren.

Cohen: The fact that they have that upper end of the market, that’s the aspirational piece. So even when they open up in outlet centers, the volume-oriented business is done to make money, while the couture part of the business is meant to really keep the image alive.

But the distance between the two is shrinking. The lower end has moved up and it comes with a bigger price tag. Saks’ Rob Wallstrom says today’s shoppers are happy to give up the fancier stores, but they don’t want to give up that shopping experience entirely.

Wallstrom: We’ve been looking for more luxury brands. And in some cases, they might be more luxurious than brands we’ve carried in the past, and some prices may have gone up. But we find the best-selling brands for us are our most luxurious brands.

But the newly upscale outlets don’t suit everybody. School teachers Megan High and Kim Jones have hit the Desert Hills Mall in search of more the more traditional outlet experience.

Vanek Smith: Are you guys finding good deals out here?

Shopper One: Not so much.

Shopper Two: No, not really.

Shopper One: I don’t think the prices are that much less than normal stores.

Case in point: At the Coach outlet, the last-year’s wallets in the clearance bin were still going for $180, a price that will, no doubt, have some shoppers heading back to the trenches.