Bob Moon: We mentioned the trouble FedEx had last quarter. Well, it’s got some company on the road to higher operating costs.

Truckers across Europe have been protesting rising fuel prices, jamming routes and holding up deliveries of food and other goods. Now Britain is trying a different approach: truck sharing.

Today, three dozen companies, including Coke, Tesco, and Nestle, say they’ll start sharing delivery trucks in the UK. The move will slash their gas bills and could take some 800 trucks off Britain’s roads this year.

Stephen Beard: It began as a green initiative. Now it looks more like a smart financial move.

The 37 companies taking part will save at least 6 million gallons of fuel a year — that’s $60 million at today’s prices. The companies have agreed to share truck space.

Damien Rees is the Business Editor of the Daily Telegraph.

Damien Rees: If one big UK retailer such as Tesco is sending out trucks full to one distribution centre or store, the idea is they won’t come back empty. They may come back with the goods of a rival company.

Some of the companies are more than rivals; they’re at each others throats: Coca-Cola and Pepsi, Tesco and Wal-Mart’s Asda.

But Tesco spokesman Trevor Datson says with the UK facing the highest fuel prices in Europe, it makes sense to cooperate.

Trevor Datson: We remain fierce competitors on price — we always will — but there are some areas that you know you can really pull together and do something quite significant.

Independent haulers may not so keen on the truck-share initiative — it could well cut into their business. But analysts have welcomed the move with one or two reservations.

Justin Urquart-Stewart is with Seven Investment.

Justin Urquart-Stewart: I think it’s a very good idea. I’m actually surprised in terms of costs they haven’t actually already done it before. But it’s going to lead to the inevitable. You know what’s going to happen: The wrong thing’s going to end up in the wrong place.

The organizers claim that a pilot scheme went without a hitch and they’re urging other companies to join up. 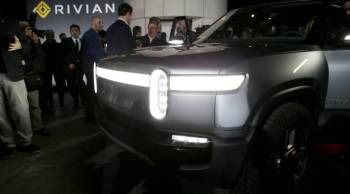