Besides gas and food, prices are rising

Besides gas and food, prices are rising

KAI RYSSDAL: The Labor Department keeps track of inflation for us. It’s an indicator that comes in two flavors. The CPI…the consumer price index…which in its most recent release was reasonably tame. And today’s PPI…the producer price index. Last month businesses paid a little bit more for goods at the wholesale level after a huge bump up in March. Two tenths percent if you just gotta know. But it was the core rate that got everybody’s attention. Don’t count food and energy…and producers forked over an extra four tenths percent last month. Lemme say that again. *Don’t count food and energy. That means business are paying higher prices for everything else. And eventually the rest of us will, too. Our Washington Bureau Chief John Dimsdale reports.

JOHN DIMSDALE: The costs of just about every commodity now in high demand are at or near record levels. And that’s putting a squeeze on businesses, says Mark Zandi of Moody’s Economy.com.

MARK ZANDI: Given the tough economic environment, they’re having a hard time passing these cost increases along to consumers. So consumer price inflation, at least outside of energy and food, has remained relatively stable and low. But that’s only because businesses have had to eat these higher costs. It’s cutting into profits and that’s why profits are down for many companies.

Without some relief, Zandi says companies will have to start cutting back and laying off workers. But the chief economist at the U.S. Chamber of Commerce, Martin Regalia, thinks it’ll be a while before wholesale price increases start to hurt.

MARTIN REGALIA: Profits were very, very high going into this period, and I think there’s a considerable amount of leeway for businesses to absorb this. It’s not something that they want to do, but something international competition is kind of forcing them to do.

Regalia says U.S. companies are finally getting some export advantages overseas, thanks to the weak dollar. And they don’t want to lose market share by raising prices. But Mark Zandi says the current trends can’t last long.

ZANDI: If oil heads to $150 and the price of wheat and soybeans and copper keeps on rising, then businesses are going to get hammered and they’re going to lower jobs. And ultimately we’re going to pay for it in the form of higher prices for the things that we buy.

And consumers, says Zandi, could just stop buying things if prices get too high. And that would also spell trouble for businesses. 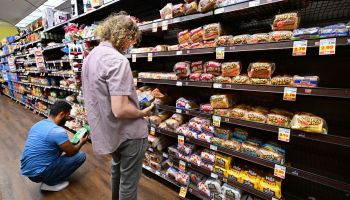