Scott Jagow: The price of milk is now about the same as the price of gas: almost $4 a gallon. There may be a lot of reasons milk prices have gone up so much, but one of them could be that dairy farmers are manipulating the price. Wall Street Journal says the government is about to bring charges of price fixing. Dan Grech has more.

Dan Grech: Over the past four years, consumer milk prices have risen about 32 percent. That’s more than double the rate of increase for food prices in general.

The Department of Agriculture alleges the Dairy Farmers of America drove down what it paid for raw milk by misreporting prices to the USDA. And the dairy co-op allegedly drove up the price retailers paid for the milk through trading at the Chicago Mercantile Exchange.

Henry Kinnucan is an agricultural economist at Auburn University. He found in a study that while prices increases are passed onto consumers, milk price drops are pocketed by the middlemen like the Dairy Farmers of America.

Henry Kinnucan: When farm prices go down, the retail prices tend to be sticky, which means that the margins are widened. And that’s a fairly classic symptom of market power being exercised by middlemen.

Revenue for the Dairy Farmers of America grew to $11.1 billion in 2007, up nearly 50 percent from the year before. 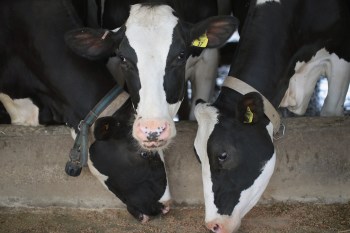