Renita Jablonski: The rise in food prices is pinching budgets around the world.
But in Haiti, the poorest country in the Western hemisphere, it’s been especially painful. Haiti’s main staple is rice. The price of rice has jumped nearly 80 percent since September, sparking deadly protests that led to the ouster of the country’s prime minister. This, in a country that once produced all the food it needed. As Reed Lindsay reports from Port-au-Prince, many in Haiti blame the U.S. for their hunger pangs.

Reed Lindsay: (Market sounds) Food vendor Cileana Monase sits on a cinder block in a muddy market place in downtown Port-au-Prince. Cileana is selling yams in the searing heat. But there are few buyers.

Cileana Monase: (speaks through a translator) I put my merchandise on the ground yesterday, and I didn’t sell anything all day. I can’t make money to eat, to drink. I’m hungry, but I don’t have anything.

Yams, manioc, millet, breadfruit — all of these used to be Haitian staples, but today they’re not selling well.

Monase: Most food nowadays is from Miami. All the food we eat is imported.

At the top of this food pyramid is rice, known here as Miami rice.

Monase: Lots of Miami rice started coming into the country. Even though Haitian rice was still sold, it became too expensive. Miami rice destroyed Haitian rice.

Fourteen years ago, at the urging of the U.S. government and International Monetary Fund, Haiti slashed its tariffs and opened its market to imports. U.S.-subsidized rice poured into the Caribbean nation. Rice, once so prized it was only eaten on Sundays, suddenly became cheap enough that the average Haitian could eat it daily. Haiti became the third largest importer of U.S.-grown rice, and local production of rice and traditional food nosedived.

Marie Michel Jean: There is no rice in the mountains. Where I came from, nobody grows rice.

That’s Marie Michel Jean. She moved here 12 years ago from the countryside when farms began to collapse. She blames cheap imported food and a government that has done little to help the country’s farmers.

Marie Michel sells rice from a sack branded with a U.S. flag. She prefers yams to rice, but says because the demand for yams is weak, she makes more money selling imported food. She’s dropped her prices on rice by about 20 percent in the last week, thanks to an emergency government subsidy. But at 50 cents a pound, it’s still too pricey for most Haitians. Half the population gets by on less than a dollar a day.

Vegetable vendor Cileana Monase says she’ll eat whatever she can afford to buy. Lately the situation has become so desperate, people now talk about a “Clorox hunger,” a hunger so painful it feels as if they’ve swallowed bleach.

Monase: Any food that comes, we’ll eat. We’ll take anything we can get. We’re not well. We have nothing. We’re hungry. Hunger is killing us.

Haiti’s President Rene Preval has promised to cut the price of fertilizer and improve irrigation for farmers. But those who are hungry now are skeptical that they’ll see a change in food prices anytime soon. 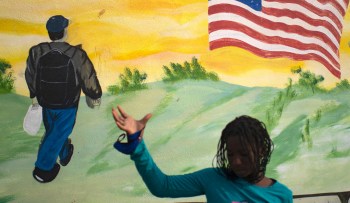