Renita Jablonski: Sprint Nextel and Clearwire have been working on financing a big deal. The companies will combine their wireless broadband units into a single $14.5 billion company called Clearwire. As Marketplace’s Amy Scott reports, they’re getting a little help from some powerful friends.

Amy Scott: The likes of Google, Intel, Comcast and Time Warner Cable are expected to invest more than $3 billion in the venture.

Roger Entner: It’s a partnership of companies that need each other.

Roger Entner follows the wireless industry for IAG Research. He says Intel needs help rolling out its WIMAX technology. Sprint Nextel needs partners to make its $5 billion investment in WIMAX worthwhile. And the cable companies need allies to compete with telecom giants ATT and Verizon. What consumers will get is a nationwide wireless network up to five times faster than traditional wireless, for now.

Entner: It’s an endless arms race, and the Verizons and the AT&Ts of the world are not idly standing by and not upgrading their networks as well.

The deal is expected to close by the end of the year. 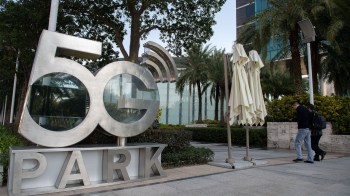