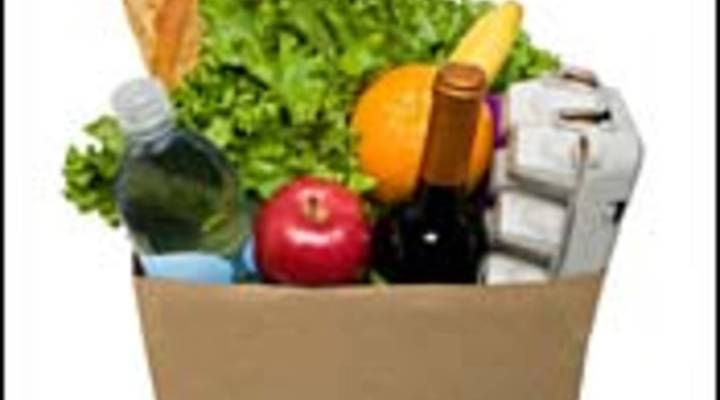 Kai Ryssdal: We’ve been telling you the past couple of weeks about rising food prices and how they’ve led to riots and strikes from Egypt to Vietnam.

Today, it was Haiti, where thousands stormed the presidential palace to protest the soaring cost of living. Record commodity prices — mostly wheat and rice — are to blame.

And while food’s abundant here, grocery bills are heading up at the fastest rate in almost 20 years, which poses a problem for supermarkets with razor thin profit margin.

Stacey Vanek-Smith: I’m doing my weekly grocery shopping at Ralph’s, a mid-priced supermarket in L.A. I recently switched from a pricier store — and so have lots of people, says Harry Balzer with consumer research group NPD.

Americans spend about 10 percent of what they earn on food. If food prices go up and incomes don’t, most of us will change what we buy or where we buy it. Balzer says that has supermarkets panicking:

Balzer: The one single advice I give them is you have to look for creative ways to make sure you give consumers options to keep their food costs moderate.

Like smaller packages so stores can charge more for food, but customers don’t feel like they’re spending more. Balzer says we’ll see things like half-loaves of bread and more 100-calorie packs. Ralphs was selling half-cans of soda, but a six-pack was only 20 cents cheaper than the regular size.

Vanek-Smith: You’re getting less for your money. Those are cute, though.

Supermarkets’ profit margins are only about 1 percent, so when food costs go up, stores pretty much have to raise prices, but to keep customers, they create the illusion of good deals. Morningstar Analyst Mitchell Corwin:

Mitchell Corwin: They do lure consumers in with low prices on products that a lot of consumers purchase frequently and hope that they will also purchase products where the supermarkets will make higher margins.

Corwin says supermarkets are also beefing up prepared food sections. Pricey pasta salads and rotisserie chickens might seem like an expensive choice in tight times, but Corwin says shoppers buy them instead of going to restaurants.

Phil Lempert: People are also trading down from, perhaps, a major brand to the store brand.

That’s Phil Lempert, with supermarketguru.com. He says stores are expanding low-priced house brands, because they make more money on them.

Lempert: And when it comes to different products like meat, they’re going for a cheaper cut.

Ralph’s had a wide of inexpensive beef and pork cuts, maybe to make up for the $7 chicken and $7 milk — yeah: $7 milk. Morningstar’s Corwin says prices like that have supermarkets staging more sales. He says they have to offer cut-price promotions because storewide, they can’t compete with Wal-Mart:

Corwin: They can’t do everyday low pricing, because that exposes the price gap between those stores and Wal-Mart.

And what a gap it is. Milk and chicken cost about half of what they do at Ralph’s, but the Wal-Mart was a long drive and gas is practically $4 a gallon. Plus, when I got to Wal-Mart, there weren’t any carts and the lines were huge. One shopper told me despite rising prices, she’s sticking with her high-end supermarket.

Shopper: I am a working mom and I go there because I don’t have to wait in line, because I know everybody there, so I haven’t changed it.

Supermarket guru Lempert says supermarkets are trying to cash in on this sentiment by sprucing up stores and creating relationships with shoppers through things like loyalty programs.

Cashier: Do you have a Ralph’s Club Card with you today?

That loyalty could pay off. Americans usually divide their food budget evenly between restaurants and stores, but as money gets tight, they’ll probably eat out less and spend more at the supermarket.