Doug Krizner: For years, Americans and Canadians could travel across the border without documentation. Just declare your nationality to the border agent.
That changes today. A new rule requires U.S. and Canadian citizens to use a passport or a driver’s license along with a birth certificate. There’s a similar rule for Americans traveling to Mexico.

So how will these changes impact the border economy? From the Americas Desk at WLRN, Marketplace’s Dan Grech reports.

Dan Grech: It can take hours to cross the southern border with Mexico. But the northern border was a different story. Customs agents took people’s word for it. It took an average of 45 seconds to process a vehicle. Now, anyone without the proper documents may be turned away.

Angelo Amador: The whole perception is the United States is not a welcoming country. The motto seems to be: If you come, fine. And if you don’t, even better.

Angelo Amador is with the U.S. Chamber of Commerce. He says the passport changes come at a time when the U.S. could use more Canadian tourists, not fewer.

Amador: A large sector of our economy depends on tourism, and I think it would be bad to continue damaging it.

To make things easier, starting tomorrow Americans can apply for a wallet-sized passport card to travel to Canada, Mexico and the Caribbean. The cards will be ready by this spring. 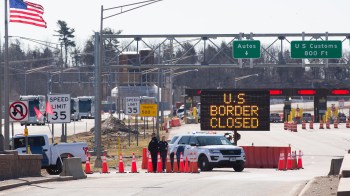 Some communities feel the pinch as U.S. and Canada close border to nonessential travel