Loosening the limits on French sales

Loosening the limits on French sales

Doug Krizner: Here in the States, you can find a sale somewhere seven days a week, 365 days a year. But in France, sales are only allowed twice a year. Now, the French government is considering allowing them year round. As Anita Elash reports from Paris, consumers would get a break.

Anita Elash: On the first weekend of the annual January sales, the Rue du Commerce in Paris’ 15th arrondisement is crowded with shoppers laden down with purchases.

Sophie Guyat has bought shoes, a dress, and several T-shirts and pullovers, all at half-price. She’s been planning this day since Christmas.

Sophie Guyat: During my holidays, Christmas holidays, I went shopping, and I tried different things, different dress, different coat, different shoes. So when the sales begins, I know what I want.

Les soldes, as they’re called, are an event worth planning for because they’re allowed just twice a year. It’s the only time retailers can drop prices below cost. That means deep discounts for shoppers and a bonanza for shopkeepers.

Some stores do a third of their year’s business during les soldes. But economists say there’s a big downside to the French system. It keeps prices artificially high the rest of the year.

Peter Jarrett is with the Organization for Economic Cooperation and Development:

Peter Jarrett: It clearly means that retailers are able to get away with maintaining their margins at a higher level than they would otherwise.

Retailers claim they could be ruined if the government allows sales all year long. Not because their margins would drop, but because sales would no longer be a major event.

Jacques Perrilliat is the head of a trade association that represents the large department stores in France:

Jacques Perrilliat (voice of interpreter): The reality is people buy things during the sales that they probably don’t need. And without the huge marketing effort that goes into the sales, they probably won’t buy them.

The French government will decide next month whether to do away with les soldes — just after the January sales have ended. 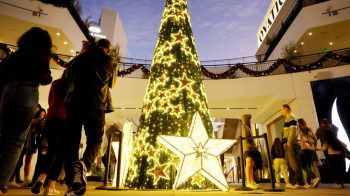