Lufthansa swoops in on JetBlue

Lufthansa swoops in on JetBlue

Scott Jagow: JetBlue has been struggling. It’s almost half a billion dollars in debt. The airline’s stock has lost about half its value this year.

Sounds ripe for a takeover. Not quite, but German airline Lufthansa is buying a 19 percent stake in Jetblue. JetBlue gets $300 million in cash. But what’s in it for Lufthansa?

Let’s ask airline analyst Doug McVitie with Arran Aerospace in France. What do you think, Doug?

Doug McVitie: Lufthansa is looking at a post-Open Skies world from April next year, and saying, “Hang on — the North Atlantic’s going to become a more interesting place, more competitive environment, we need a base at both ends of the pond.” So linking up with JetBlue, or investing in JetBlue, is a really smart move. It potentially buys them future business.

McVitie: Well, once Lufthansa has a tie-up with JetBlue, they can begin to start promoting that. Anywhere JetBlue flies, you can fly on from Kennedy to anywhere Lufthansa flies. So basically, it allows Lufthansa to have a wider access and potentially funnel more business to its North Atlantic traffic, which is primarily where most of the European carriers make a majority of their money.

Jagow: Why do you think Lufthansa chose JetBlue?

Jagow: Do you think the dollar versus the euro had anything to do with it?

McVitie: I’m sure it did. The moment you . . . it’s almost as if Europeans are on a holiday in relation to the U.S. So this is the time to strike, and it’s probably not the last.

Jagow: OK, Doug McVitie of Arran Aerospace in France. Thanks for joining us.

McVitie: It’s a pleasure, thanks a lot. 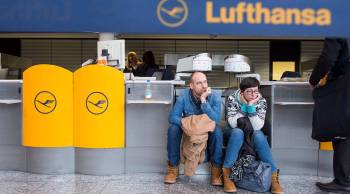