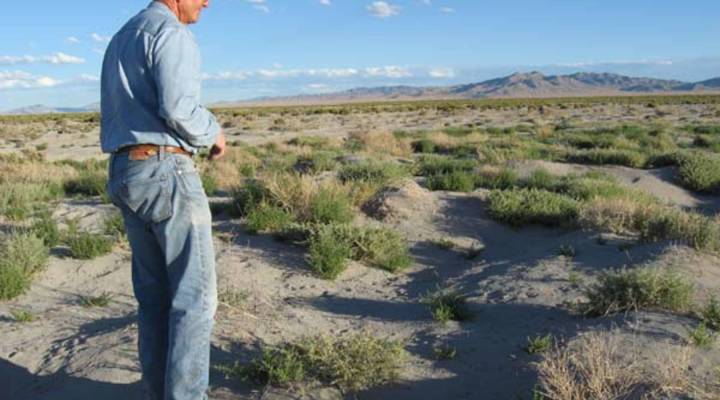 Will Southwest’s economy dry up?

COPY
Dean Baker looks at an over-pumped, sandy area that used to be a lake. Stacey Vanek-Smith

Will Southwest’s economy dry up?

Dean Baker looks at an over-pumped, sandy area that used to be a lake. Stacey Vanek-Smith
Listen Now

KAI RYSSDAL: The relative humidity in Los Angeles today was 9 percent — not that that, on the face of it, has anything to do with the business news of the day. But if you think about things in a slightly larger context, you’ll see what I mean…

Average temperatures across the southern United States are predicted to rise over the next 50 years, and precipitation levels are expected to drop. Here in the Southwest, scientists are saying it’s going to be especially dry — which will likely have dire consequences on the economy of one of the country’s fastest-growing regions.

STACEY VANEK SMITH: Climate models by U.S. academics project a 15 percent decrease in moisture in the Southwest between the years 2021 and 2040. That might not sound so bad, but the same drop in precipitation led to the great Dust Bowl in the 1930s.

Jeffrey Mount directs the Center for Watershed Sciences at U.C. Davis. He’s been researching the drought’s future effects on hydropower:

JEFFREY MOUNT: The immediate and most severe impacts are brownouts.

Mount says those brownouts will likely become more and more frequent. As snowpacks recede, he says, dam levels will drop and strain the region’s power grid.

MOUNT: One of the things that tend to come with drought tends to be heat waves — and the demand for electricity is very very high during those heat waves. And the hydropower system is one of our great buffers there, because they can spin it up very fast.

Mount says the Southwest’s growth is directly tied to the ability to move water around cheaply, to very dry cities like Phoenix and L.A. Mount says the price of the energy needed to move that water will rise stratospherically as states go to the open market to buy extra energy.

Those higher prices for water and energy could affect everything from hi-tech to agriculture. Farming is a $40-billion industry in the Southwest. It also drinks up about 80 percent of the available water. Farmers are trying to conserve.

Nevada farmer Dean Baker watches his massive sprinkler system move slowly over an alfalfa field. He says farmers are using low-hanging, rotating sprinklers like these to stretch their water supply.

DEAN BAKER: Used to be, we had the big sprinklers that went swish, swish, swish in this extreme low humidity, it evaporated before it ever hit the ground. These are hugely more efficient with water use.

MOUNT: Eventually, low-value crops — things like alfalfa and subsidized crops like cotton, for example — will begin to fade away as the demand for water and price of water begins to go up.

Agriculture isn’t the only business expected to struggle. John Harte is a professor of environmental sciences at Berkeley. He says the region’s $3 billion ski industry will be hurt by declines in snowfall.

JOHN HARTE: Our projections are, 30 years from now, skiing will become a thing of the past in the Western mountains.

Harte says sport fishing will take a hit as higher water temperatures kill fish and stream levels fall. That could take a big bite out of the region’s $150 billion tourism industry. And, Harte says, residents of the Southwest’s booming cities could have to drastically cut back on their water use.

HARTE: Rationing could very well occur, and certain uses that we now enjoy — like gardens and car-washing and so on — are going to be curtailed.

MOUNT: Mark Twain said: “Whiskey’s for drinking and water’s for fighting.” So I see legions of lawyers doing very, very well in the future.

Their northern neighbors could see a boost in business, too. Some scientists have predicted the Southwest’s climate will migrate north. Farmers in Oregon and Washington have already started replacing apple and onion crops with vines, hoping for Napa Valley’s ideal wine climate. And British Columbia has rezoned more than 160,000 acres of forest for agriculture, predicting shorter winters will bolster farming there.