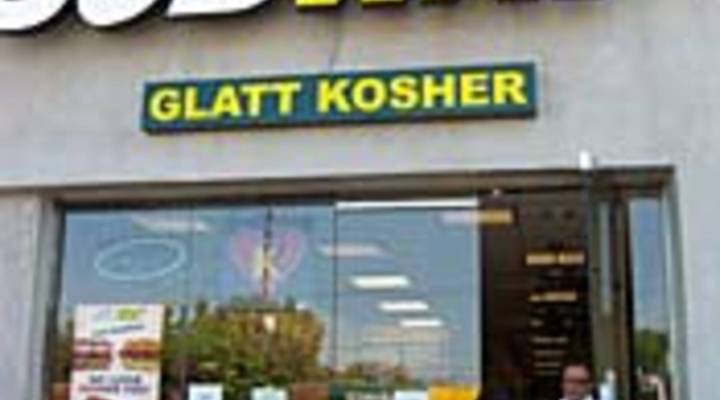 Subway’s kosher outlets are on a roll

Subway’s kosher outlets are on a roll

BOB MOON: A whole lot of people are “eating fresh” these days — Subway has more restaurants than any other fast-food chain in the country. Of course, those 21,000 locations can make it tough to keep growing. So Subway is finding new markets overseas.

Hmmm — didn’t know they say “Eat Fresh” the same way in German… Aside from expanding across the sea, the chain is trying to sandwich in some new growth here at home.

STACEY VANEK SMITH: It was “friends and family day” at L.A.’s newest Subway yesterday. The restaurant was packed with people from the mainly Jewish neighborhood. It was 21-year-old Maxine’s first meat sub.

MAXINE: I had a whole wheat pastrami sandwich, toasted. It was excellent — really, it was like melting in my mouth. It was amazing.

Keeping kosher means no pork and no mixing meat and dairy. So no cheese on the subs here. Twenty-six-year-old owner Jonathan Sedaghat says he got bored with the kosher restaurants in his neighborhood. So he teamed up with his friend, 25-year-old Sammy Aflalo. Aflalo says the Orthodox community is a strong, untapped market.

SAMMY AFLALO: All these Orthodox people, all the kids, they all watch the same TV programs as everybody else. But their whole life, they can’t eat here.

Opening a specialty Subway has some unique challenges. Aflalo and Sedaghat had to find special meat. They invested in a sink so customers could wash up and say a prayer before eating. And then there were all the approvals.

AFLALO: Everything not only has to be certified by Subway, but more importantly, also by Kahilla, which is our kashrut, our certification company. So every product — from every sauce to the meat — has to be approved by them.

Those approvals cost money, and that special meat costs about three times more than the meat other Subways use. That means the sandwiches at the kosher Subway are a couple bucks more than they are at regular restaurants. But Sedaghat and Aflalo expect their customers will be quite happy to shell out a little extra for a kosher sub.

SEDAGHAT: People are psyched. I constantly get e-mails and calls every day . . .

This isn’t Subway’s only kosher restaurant. The first one opened last year in Cleveland, and there are two more in New York. Thomas Coba is the chief operations officer for Subway. He says the company has also launched halal locations in New Jersey.

THOMAS COBA: We’re able to attract more customers that maybe we wouldn’t have gotten if we didn’t make the modifications.

Coba says tapping into minority markets is a great way to expand Subway’s brand inside the U.S. And, he says, it’s good experience for overseas growth.

COBA: This gives us an additional advantage, when we can modify our menu and know that we have acceptability of the product. It’s something that will really play out in our growth over in other countries.

It’s certainly a win-win for Subway, says food consultant Ron Paul. He says franchisees take on all the financial risk and Subway can tap their knowledge of local markets.

RON PAUL: In order to maintain good franchisee relations, you have to be willing to try ideas that they have.

Like a schwarma sub — That’s an innovation Aflalo and Sedaghat are offering at their franchise. Other fast-food companies don’t seem to be following Subway’s lead just yet. But COO Thomas Coba expects the competition will likely want to take a bite out of a market that Jewish authorities say is worth as much as $100 billion.

Coba says Subway’s kosher restaurants are thriving, and maybe not just because of the food.

FEMALE CUSTOMER: It’s a great place to meet people and to find a husband — a kosher husband.