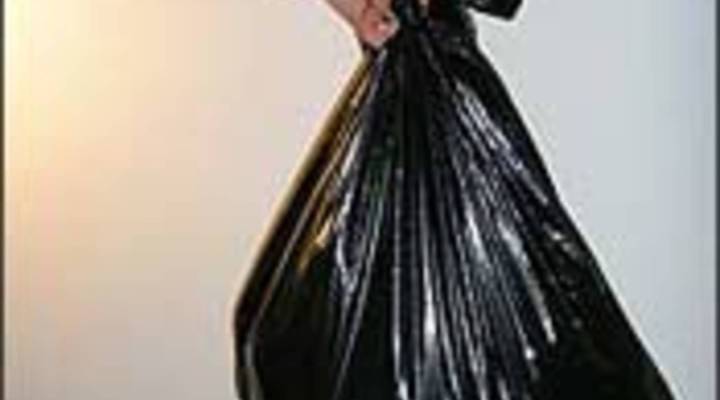 We love to talk trash

We love to talk trash

Doug Krizner: We’ve excited about a special series planned for air later this fall. It’ll look at whether we can sustain our consumer economy.

The staff is doing the reporting for it right now. One of them is Marketplace’s Tess Vigeland. She’s volunteered to spend two weeks hauling her household trash around with her. She joins us in studio. Tess, what’s the set-up?

Tess Vigeland: Well, you know, for this “Consumed” series that’s going to air in November, we’re talking all about what our consumption habits are doing to the planet. If you look at the numbers from the EPA, our population since 1960 has grown by 60 percent. The amount of garbage that we’re generating has grown by 179 percent since 1960. So there’s a major disconnect in terms of how much we are sending to landfills. And so this experiment is really all about trying to put a personal face on what, at least I am doing to the planet.

Krizner: On a big problem?

Krizner: What was it like? In the end, how much did you accumulate?

Vigeland: Well, I’m in Day 11 right now, and I just yesterday had to throw out my first trash bag. It was 10 days worth of my trash, and I only used one bag. In our family, we do a lot of recycling and we do a lot of composting. So I didn’t have a whole lot of trash. But by the end of 10 days, I had chicken bones in there, I had corn cobs which don’t compost very well. And all that really started to stink.

Krizner: Before we went to air you were telling me an interesting story, some feedback you have received, I guess an exchange that happened through our website. And they were telling you of a way that you can break chicken bones?

Vigeland: Yes, it’s something called the Bokeshi, and I’ve never heard of this before, but it’s essentially a plastic bucket where you can toss in fish skin and chicken bones and the things that you wouldn’t think would break down, and you put this special weed germ on it. And over a matter of weeks and months, it actually breaks down into a liquid and you can pour that on your plants.

Krizner: So would you make a challenge, then, to listeners, that they should make an attempt to do this? Just to be able to get an understanding of how much they’re contributing to this notion of throughput — waste that is ending up in the environment somewhere?

Vigeland: Absolutely. And you know, it’s a growing problem, because we’re running out of places to put landfills. So at some point, we are going to have to reduce the amount of garbage that we are sending out there to that “away” place, which just kind of goes away and we don’t think about it. We have to think of ways to cut down on both our consumption on the front end and what we throw away on the back end. And what I realize as I’m going through this challenge is that it is infinitely possible to reduce your waste stream.

Krizner: Marketplace’s Tess Vigeland. Thanks so much.