An economy built on hopes and dreams

An economy built on hopes and dreams

Bob Moon: More than 1,000 people died when the levees broke and flooded 80 percent of New Orleans. Today, President Bush and his wife Laura went there to praise the people dedicating their lives to the city’s renewal — the ones working feverishly to rebuild a place that has a reputation for being laid-back.

That’s the whole idea behind the old song “Way Down Yonder in New Orleans” — which the lyrics tell us is a land of dreamy dreams. These days, those dreams are for sale more than ever before. Melanie Peeples explains.

Melanie Peeples: Maybe you’re wondering what New Orleans is like these days. Say you haven’t been in here in the last two years… Or maybe you’ve never been here, and all you know about the Big Easy comes from the very uneasy images being replayed on TV this week.

Or, maybe you’ve seen one of the commercials, with testimonials from tourists on Bourbon Street:

Yes, the hotels and restaurants and tour companies are ready for you. The dream of daiquiri shops on every corner and a 24-hour supply of beignets lives on. This is the New Orleans you’ve always heard about. And it’s one of the reasons people are still here.

See, the French Quarter had hardly any flooding. So it’s entirely possible to come here, eat, drink and never see any destruction. You can do the same thing by following the river upstream into the Garden District. It’s some of the highest land in New Orleans.

It’s also what they call the Isle of Denial, and if you can afford the real estate, you can pretty much manage to live your life without venturing into one of the neighborhoods that wasn’t so lucky.

That’s one of two ways to stay sane in New Orleans these days: Denial. The other is an unwavering faith that things will get better. If you’re going to stay sane here, you wake up every day and take your pick.

Cynthia Willard Lewis:We have come this far by faith…

Lewis: The faith of the families in the community, that despite all the odds — the devastation, the suffering and the losses — knew this was home. We have come this far by faith that the Holy Spirit has pulled together our men and women of moral conscience to say New Orleans must be built, this international city must be restored.

City officials are buoyed by the efforts of the city’s newest arrivals, a pep squad of 20-somethings, most of whom just graduated from college. They came down to do a bit of charity work and never went back. They called their friends back home and sold them on how they could make a difference here, how they could change lives. Rebuild New Orleans the way it deserves to be rebuilt. I’ve got to hand it to these Johnny Appleseeds, sowing this city with their much-needed dreams.

Hope’s a commodity. The only question is, how long can the citizens of New Orleans afford to keep buying? Government statistics say $6 billion has been spent on cleanup and reconstruction. But most people still haven’t seen a check.

And isn’t just about money. Violent crime is up. We’ve had 19 murders in the last two weeks. One of our Congressmen has been indicted for bribery, another has been seeing prostitutes, and just this month one of the city’s most-beloved councilmen pleaded guilty to taking bribes. And as for the governor, she’s not even running for re-election.

It’s easy to turn cynical or get depressed, to not like the person you find yourself becoming. Some people have given up, cashed in their dreams and moved away. Others are on the verge. They are spent.

New Orleans is a futures market — these days, an economy built on hope. Which, unless we get some help real soon, may not spring eternal.In the land of dreamy dreams, I’m Melanie Peeples for Marketplace. 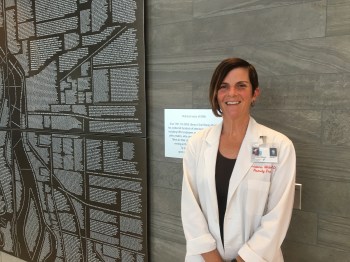