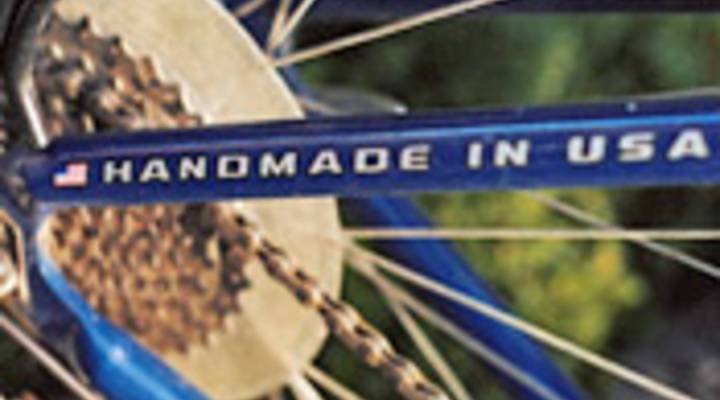 ‘Made in the USA’ has new cachet

COPY
Bicycle handmade in the USA velo_city via Flickr

‘Made in the USA’ has new cachet

Bicycle handmade in the USA velo_city via Flickr
Listen Now

Scott Jagow: The toy company Mattel is in serious damage-control mode. This week, Mattel put full-page ads in major newspapers. The company’s hoping to reassure the public after two huge recalls of Chinese-made toys. With the holidays not too far away, other toy companies think this could be a chance to fill their stockings. Stacey Vanek-Smith reports.

Stacey Vanek-Smith: Made in the USA could very well be the motto this holiday shopping season.

Ed Loewenton is the owner of Vermont-based Turner Toys. He’s seen sales of the company’s natural products like wooden alphabet blocks and baby rattles surge 500 percent since the recalls began.

His toys are mostly made in Western Europe and the U.S. and he’s posted that on the company website.

Loewenton: Our contact form, which isn’t used all that much is suddenly very busy.

But Candice Corlett, with WSL Strategic Retail, says consumers have short memories, and as long as nothing new comes up, Mattel sales probably won’t suffer for long.

Candice Corlett: Shoppers have been very confident in them for a long time and as long as Mattel does it right, shoppers will be okay with it come December.

Mattel has pledged to step up inspections and says the recalls shouldn’t affect holiday sales.