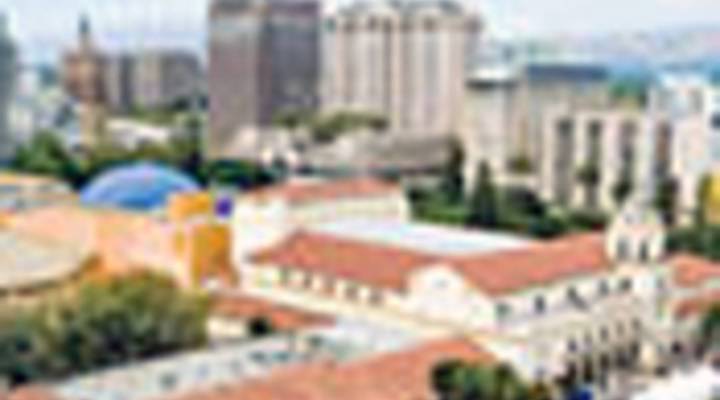 Back now to our series about investment clubs. We’re following three of them — in Seattle, San Jose and Fairfax, Va. — as they figure out what stocks to buy, sell and hold throughout the year.

We return to San Jose for lunch at an Italian joint called Frankie, Johnny and Luigi’s. Our last visit was back in April. Now, as then, just four club members in attendance. Martha Alderson, Alan Smith, Kathy Tegtmeier and Marvin Kohn. All with the same thirst for a summer drink.

We heard from this club a couple of weeks ago, when they shared how they deal with big market swings. They were a prescient bunch the day before a stock market rout. So we’ll get right to how the club is doing for 2007. Alderson is the group’s treasurer, and says they’re up about 1.5 since April.

MARTHA ALDERSON: We had eight holdings in April, and now we’ve got seven.

VIGELAND: And what’s your total amount invested at this point?

ALAN SMITH: Gosh, it seems like only yesterday we were down at 22.

VIGELAND: Why do you have so much cash right now?

SMITH: We want to go to Hawaii.

ALDERSON: One of the reasons we have so much cash is that even though we keep finding things to buy, something will happen to a stock we already own. Like we very recently, probably in the last six months, had decided to purchase a stock called Tier One. And then a big buyout was announced, and we didn’t like the company that was gonna be buying them out, so we just decided we’re gonna let go of that holding.

VIGELAND: So you have cash from selling a stock.

ANDERSON: Yeah. We have some cash from selling a stock. We keep trying to buy and build up, and then inevitably we end up selling something. And so we’ve had about this much cash on the balance sheet rotating through for awhile now. And we’re trying to — we want to be more fully invested.

MARVIN KOHN: But the other thing we want to be careful of is that our investments are balanced. We sold a company in the financial sector, so both Kathy and I have looked for replacements in the same sector.

Tier One isn’t the only stock they sold in the last three months. Also gone: Chico’s, the women’s clothing store. It was on the chopping block at their meeting in April.

KATHY TEGTMEIER: We felt very strongly about the original Chico’s product line and its customer base. And they started branching into a much younger marketplace, kind of neglecting their bread-and-butter customers. And they just haven’t . . . weren’t as successful, and the numbers were reflecting that. And we just kind of went, you know, we’re not gonna wait for them to figure this out and get their act together.

Another company faces the ax at this meeting. The group has owned stock in Brown and Brown — an insurance brokerage — for four years. But Smith and Kohn sense problems.

SMITH: I’m in favor of getting rid of Brown and Brown, actually.

Yeah, their performance is . . . and it’s, the trend isn’t slowing.

ANDERSON: The trend is down, their growth is still reasonably good — it’s about 14 percent year over year for the last quarter.

KOHN: And often times, it just takes a lot longer to digest and get the economies of scale.

SMITH: I haven’t seen any analysis on Brown and Brown other than it’s going down. But if it continues that trend, it doesn’t seem to be a company we want to have at this moment at this time.

KOHN: Realistically, I think we should be watching it.

SMITH: Watching it, or sell? I mean ’cause we haven’t seen any data, so it’s unfair just to simply sell on a gut reaction. I mean, if I had to, I’d say sell. But make a decision maybe in August whether we hang on or sell.

So they’ll give Brown and Brown a little more time to shape up.

And then the fun part: spending the cash they had available in their investment pot. Kathy Tegtmeier had already done some research into possible stocks in the financial sector to replace the Tier One bank stock they sold.

KOHN: It markets its services in the L.A. metropolitan area, Orange county, the San Francisco Bay Area, San Mateo, Silicon Valley. So far as we here are concerned, this is a neighborhood bank. Not all bad dealing, buying stock from a company that, you know, drive by and see what people are walking in and out.

SMITH: Clearly, you can see that it’s a company that’s well-managed, under control and is constantly growing in the right direction. There isn’t a single year in which it’s, you know, really going wrong.

ANDERSON: Well, how about, I propose for East-West Bank Corp, buying a hundred shares.

SMITH: How much would that give us as a stake?

ANDERSON: So we’re agreeing to go ahead and buy a hundred shares of East-West?

SMITH: Yeah, I would vote for that.

VIGELAND: So Kathy, you’ve got a little smile on your face that you guys are investing in East-West Bank.

TEGTMEIER: One of my struggles is that you fall in love with a company. And then, you are emotional about what you’re buying and selling. It’s a pleasure to bring stocks to this club meeting that other people look at and go yes, that looks good.

VIGELAND: And with that, they adjourned.

By the way, if you’re interested in finding out more about Investment Clubs.
There’s a conference called InvestEd here in Southern California next weekend.
Marvin and Kathy and some of the others from the San Jose club will be there.

We’ve got a link to more information on our website, marketplace.org. Click on the investment club link.

Next week, our Virginia club, Formerly Baroque, is far from it.