KAI RYSSDAL: You could have turned on C-SPAN at virtually any point today and seen a variation on a theme. Somebody either for or against the Democratic resolution opposing the president’s plans for Iraq.

The debate in the House will go on all week, but the business of Congress isn’t waiting around. Massachusetts Democrat Ted Kennedy held hearings today on an idea he says is long overdue: paid sick leave.

But a federal sick days law may be a tougher sell. Democrats control Congress, barely, and many Republicans and the business lobby oppose the idea on principle.

Right now, nearly half of American workers get no designated paid sick time. Kennedy’s bill would give employees at least seven days a year. It exempts companies with less than 15 workers.

Business advocates warn that if the bill becomes law, tiny companies may cut staff to get that exemption. Bigger ones may not expand because of labor costs. Deja vu, say their opponents in this battle.

DEBRA NESS: These are many of the same arguments we’ve heard every time we’ve tried to take a step forward in the workplace.

NESS: The top 20 competitive countries in the world, except for the United States, all provide paid sick days to their workers.

Supporters of a federal sick days mandate admit passage will be difficult, but insist there’s more energy and momentum on the issue than ever before. 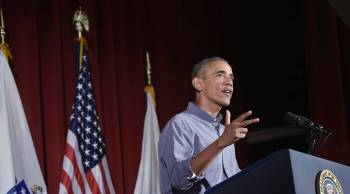