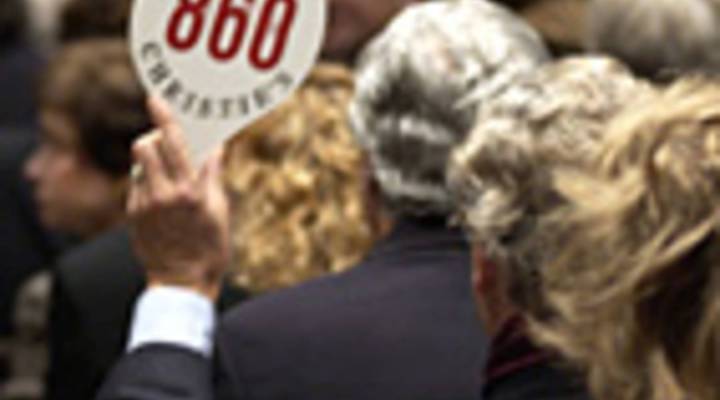 COPY
A bidder raises his paddle during an auction at Christie's in Rockefeller Center in New York City. Fernando Leon/Getty Images

A bidder raises his paddle during an auction at Christie's in Rockefeller Center in New York City. Fernando Leon/Getty Images
Listen Now

MARK AUSTIN THOMAS: This year’s art auction season is just about to get rolling. The first big sales for the year kick off next week. 2006 was a very good year for the art market. Profits at art auction houses Christie’s and Sotheby’s were up more than a third from 2003. And this year could be another one for the record books. Skyrocketing demand has pushed prices to never-before-seen highs. But is the bubble about to burst? Stacey Vanek-Smith takes a look.

FRANK LLOYD: You can see the imprint of his hand on the piece. And you can see a really forceful and energetic encounter with the material itself.

Art prices have shot up an estimated 20 percent in the last five years. That’s pretty much on par with the hike in gas prices.

So, it seems like you can’t go wrong purchasing a Picasso. But how long can the boom keep booming?

Eileen Kinsella is the editor of The ARTnewsletter. I asked her how long the market could sustain this growth.

EILEEN KINSELLA: It’s hard to imagine it continuing to increase at this rate. But again, I’ve asked that question before, and been surprised at the answer in ensuing seasons.

The art market has busted before. In the mid-’80s, prices were flying high as new wealth in Japan drove up demand. When the Japanese market tanked, art prices plummeted, too.

But Paul Provost with Christie’s auction house in New York says this time is different.

Demand isn’t just coming out of one country. The newly wealthy in China, Russia and the Middle East make this market especially stable.

Wall Street seems to agree. Over the last couple of years, many banks and other financial institutions have started offering loans and even investment advice to people who want to buy fine art.

Indexes have popped up, too, so you can bet on the rate of return an artwork will get.

LLOYD: I keep in mind that kind of wonderful quote from the critic Dave Hickey. The work of art itself has no value. Value is what we assign to it. Critics, curators, historians, but the thing itself has no intrinsic value.

Maybe so, but that hasn’t curbed the enthusiasm of the art world. Both Christie’s and Sotheby’s are estimating profits for February will total around $400 million. 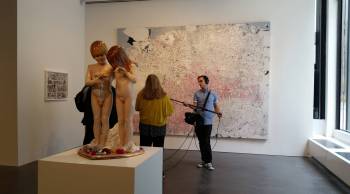