The end of musicals?

The end of musicals?

MARK AUSTIN THOMAS: Music theater could be doomed in Britain according to one the country’s most successful composers. Andrew Lloyd Webber who wrote such hits as Cats and Phantom of Opera says wireless microphones could become too expensive for theaters use. From London, Stephen Beards reports.

STEPHEN BEARD: Lloyd Webber has three hit shows running in London, including his version of the Sound of Music.

But he warns the sound in the seven West End theatres he owns could become inaudible. The wireless mics his productions rely on could get too expensive to run.

Britain’s telecom regulator is to blame, he says. The regulator is planning to auction off to the highest bidder the airwaves used by theatres and concert venues.

A cell phone company with deep pockets is likely to win. The fees could then soar and the theatres could be priced out.

The regulator refuses to listen to the growing chorus of disapproval. Lloyd Webber warns the West End could fall silent, .that the end of Musical Theatre in Britain is nigh. 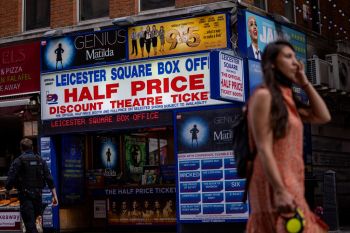