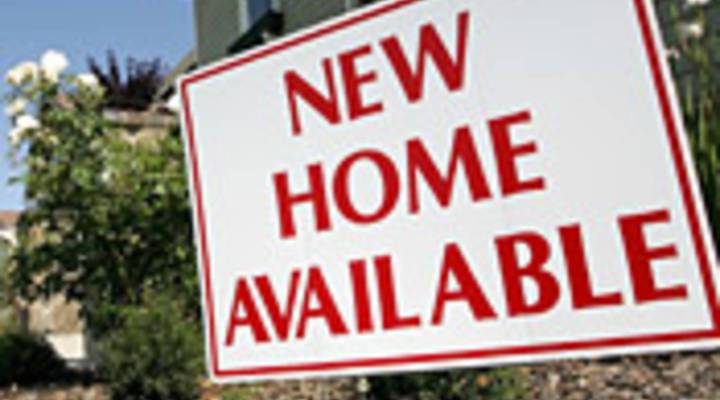 Housing bubble had a slow leak in 2006

Housing bubble had a slow leak in 2006

BOB MOON: It’s not all bad news when it comes to the housing market. We found out today that new-home sales actually bounced back up a bit in November. They were up 3.4 percent over October. Another hopeful sign: bloated inventories have fallen for a fourth straight month, while the median price for a new home has climbed.

Now back to reality: From a year ago, sales are down 15 percent. And, as we all know all too well, that’s the way things have been heading all year long.

Marketplace’s Tess Vigeland is here with a look at a wild year in housing.

MOON: Not a good year to be selling your house. Was that the sound of a big bubble I heard popping?

VIGELAND: Well, you know, if you look at the national housing market from the beginning of the year to now the end of it, I think you would say, yes, the bubble popped. But let me take that back and say no, it didn’t really pop so much as dissipate. If you think about it like a balloon and you’re kind of squeezing the top of it and letting the air out with a little squeak . . .

VIGELAND: Yeah, well, that kind of happened all year in the housing market. And right now that balloon is pretty shriveled, especially when we’re talking about home prices and the number of homes that are being sold. So, no, we didn’t have a sudden implosion of this housing market, but it’s been a steady decline over the last several months. And some economists are saying that this decline is actually the leading edge of what could become an economic downturn, possibly even a recession. On the other hand, we’ve been hearing over the last few weeks some speculation that the worst is over in terms of the housing market. So, still a bit up in the air.

MOON: Well, take us back and give us a picture of what happened over the course of the year. If I recall, things were not looking too great for the housing market even as the year started.

VIGELAND: That’s right. But what we were seeing at that point was more of a slowing of the red-hot growth that we had seen — more than an actual slowdown. You start to see a little bit of softening in prices, but what that meant was instead of, say, having a 19-percent jump in the value of your home, it was more like 10 or 12 percent. But it was still growth.

In February, housing starts jumped 14.5 percent. That’s hardly shabby. In fact, it’s pretty incredible. And, Bob, I think sometime around then you did a story saying essentially what everybody needed was a magic 8-ball to tell them what was going on in the housing market.

Moving on through the year, new-home construction dropped 8 percent in March. But then home sales rose in April. In June, new construction was up. In August, sales slumped. And the news stayed fairly glum throughout this fall, including a record drop in home prices back in October. But also that month, sales were up. So, this is part of why you find such divergent views on whether or not we’ve seen the worst of it at this point.

MOON: So we’ve got the air coming out of the market. What were the factors in causing that leakage, if you will?

VIGELAND: First of all, long-term interest rates finally started going up. So, instead of, say, a 5.5 or 5.8 percent mortgage interest rate, you’re looking at 6, 6.3, even 6.5 and up this year. Also, prices simply got so high in some markets — actually, lots of them — that buyers were finally saying No, thanks. Now, another phenomenon that we started to see later in the year was lots of news about discoveries of mortgage fraud and a bump in the number of foreclosures across the country. That’s people who lose their homes because they simply can’t afford the payments anymore.

MOON: OK, what happens if housing continues to decline? Are we going to see serious problems here?

VIGELAND: Potentially. The new Fed Chairman Ben Bernanke gave a speech back in October where he warned that the housing slump could impair the economy for the last half of the year. So, again, it’s very hard to say what’s going to happen in 2007. But, perhaps as we did earlier this year, we can just get out that magic 8-ball, give it a shake, and see what comes out.

MOON: Thank you very much, Tess.