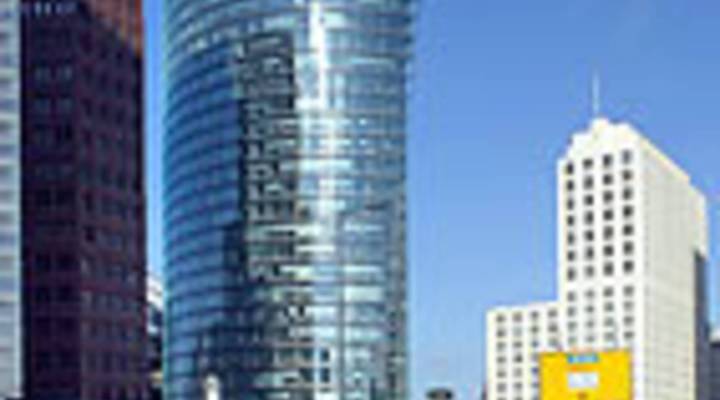 KAI RYSSDAL: Germany’s seeing some light at the end of its long dark economic tunnel. The government raised its growth forecast today. It’s banking on consumer spending and a bump in exports to take care of high unemploment and government deficits.

The city of Berlin’s been counting on help from the central government. It’s $77 billion in the red. So city leaders are considering selling off public assets. Like its subway system. It’s already started privatizing public housing. And Ethan Lindsey reports that’s attracting some unusual buyers.

ETHAN LINDSEY: Richenda Gillespie moved to Berlin more than five years ago as a young, hip idealist. She was one of thousands of foreign artists and immigrants who moved in after the wall fell. But now, as a 30-year-old translator, Gillespie has cashed in her previous identity for a new one:

RICHENDA GILLESPIE: That’s the study and living room. Then we’ve got a long corridor . . . Shall we go down that way?

One wall of her living room is stacked high with books, out on the balcony fresh spices grow gangbusters along the bannister, and a peek into the bathroom reveals a huge and gorgeous bathtub.

But a place like this would cost more than a million dollars in London. Here in East Berlin, she and her mother paid less than $400,000 for it.

GILLESPIE: What would you say, for four rooms, and I guess in London you’d be able to get a one-room apartment for the same price. And it wasn’t just about me living here, it was also about having a good return on investment in a few years’ time.

If the past two years are any indication, Gillespie made a wise investment. Some parts of Berlin have seen property rise as much as 20 percent in price since 2004. Nicole Andries says that growth has been driven in large part by foreign buyers. She shows real estate in the city.

NICOLE ANDRIES: There is a big rush on Berlin right now because prices are very low still, but we are all expecting it will go up. So, a lot of people come here and when they sell there apartment in Barcelona they can buy a whole apartment building here in Berlin.

That’s the way a lot of people have done it. The three largest foreign buyers of German real estate are the British, the Americans and the Irish. And its not just individual buyers like Gillespie.

Since reunification, Berlin has sold off hundreds of thousands of its older, public properties to big corporate names like Goldman Sachs.

Maurice Frank is the publisher of exberliner, a magazine for the city’s English speakers. He says that soon after the Wall came down, prices dropped because there was too much speculation going on.

MAURICE FRANK: There was actually so much building going on after reunification there was overcapacity and so a lot of people moved into new buildings.

But now, with prices so low, foreign investors are flocking to Berlin. The city hasn’t made it easy on them. Banks can require immigrants and foreigners to front downpayments between 50 and 80 percent. And with western realtors come western, cut-throat business tactics. Including things like evicting longtime renters from their family homes.

GILLESPIE: A friend of mine lived over the street and she tells me the story about a little old granny who lived on the second floor. And she used to look out the window and see this little old granny, and wonders what happened to the little old granny, because she wouldn’t have survived the western building contractors coming in.

Richenda Gillespie says she sometimes wonders who lived in her apartment 15 years ago. But she’s also interested in how much it’ll be worth 15 years from now.