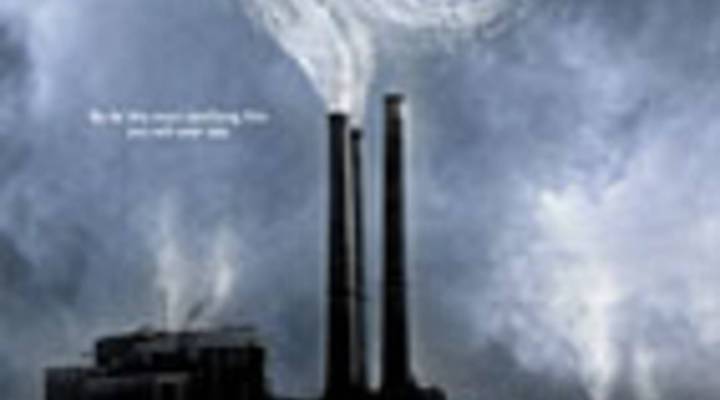 Movie poster for An Inconvenient Truth

Movie poster for An Inconvenient Truth

KAI RYSSDAL: Greenbacks are looking a little greener today. That color’s key here, as you’ll find out in a minute. The Carbon Disclosure Project released its annual report today. The group represents more than 200 big-time investors. State pension funds . . . investment banks. . . Those kinds of big investors. They want companies to disclose their greenhouse gas emissions. And how they’re going to keep making money while they cope with climate change. Al Gore was one of the speakers at the event this morning in New York. His movie, “An Inconvenient Truth,” generated a lot of buzz about global warming when it came out earlier this year. And as Ethan Lindsey reports, public policy may be ready for its close-up.

ETHAN LINDSEY: For all the hoopla over its popularity, one would be hard-pressed to call Al Gore’s “An Inconvenient Truth” a nail biter. Maybe the exploding airplanes and steamy love scenes will on the director’s cut, but on the big screen, the movie showed little more than Al Gore, a laptop computer, and Microsoft PowerPoint.

That didn’t deter audiences. At last count, the film was the fourth most successful documentary in U.S. history. Gore may have started a trend.

In Oregon, one of that state’s most popular politicians is also trying his hand at the silver screen. With a topic that may be even more difficult to understand than global climate change.

JOHN KITZHABER: We developed a vision statement that basically that says that we want to create a sustainable system by reallocating the public resources that we currently spend on health care in a way that insures that everyone has access to a defined set of effective health services.

Dr. John Kitzhaber served two terms as Oregon’s governor. He now runs an organization he calls the Archimedes Movement. The health care reform group is named for the Greek mathematician who said, “Give me a lever and a place to stand, and I can move the earth.”

Liz Baxter is the project director for the group. She says the first thing Kitzhaber did was to start a tour of the state — giving a “talk”— not unlike Gore’s lecture on climate change.

LIZ BAXTER: The talk does two things. One is it takes the sacredness away of all of the elements we have in our current health care system. But secondly, what Kitzhaber does is he really leaves you with the belief that you can make this better without destroying what we have.

And so once the group honed its stump speech, it came up with a second step, inspired by “An Inconvenient Truth.”

KITZHABER: Since I’ve seen the movie, the parallels I think are pretty interesting. But, you know, he does have a standard speech he’s been giving for years on global warming. And that’s really what we’re doing here. And actually someone suggested to me that we outta create something like that where you take that basic speech, and then begin to break it down, and then bolster it up with facts and figures.

Unlike “An Inconvenient Truth,” Kitzhaber’s movie isn’t a full-length feature. It certainly doesn’t have anywhere near the budget. A local production company — Public Media Works — worked on the film, and produced about a thousand DVDs, which are being sent throughout the state. But not to movie theaters.

Instead, the idea is for people to organize get-togethers, meetings and coffee klatches to watch. It’s a growing trend in grassroots political organizing.

Robert Greenwald has made several “guerilla documentary” movies, about Fox News and Wal-Mart — and one about Halliburton that comes out in the fall. He says that for political films, avoiding the box office makes sense.

ROBERT GREENWALD: The alternative distribution lends itself to political social films because it’s a way to bring people together. Coming together to see a story that holds you, that hopefully emotionally involves. As I say, with these films, we make sure they’re not like homework or spinach. You know, “See them because they’re good for you,” which is death.

Greenwald expects more politicians and activists to start making low-budget films. They’re a useful tool to get their messages across, he says. But unlike “An Inconvenient Truth,” they probably won’t end up at a theater near you. But Kitzhaber hopes his film will catch the attention of a different audience altogether.

KITZHABER: What we’re trying to do is force the United States Congress to have a serious debate on the real underlying problems facing the health care system.

Kitzhaber’s health care reform DVD may not make it to Sundance, but he’s hoping that a movie shown on TV screens around Oregon could eventually make it onto the radar screen in Washington.