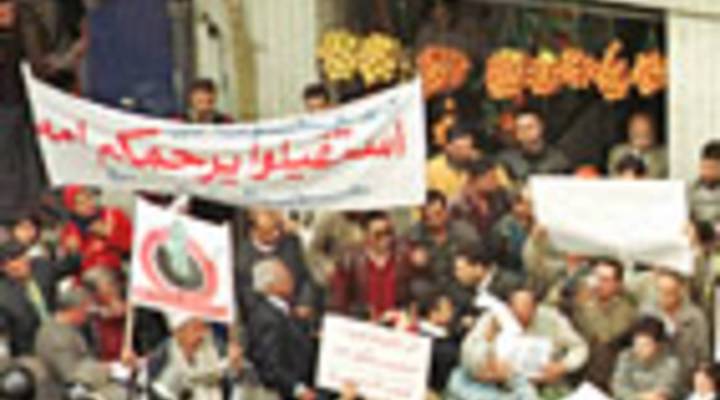 COPY
Egyptians hold up banners during a protest in front of the parliament building in Cairo in 2004. Some 400 people gathered to protest against the prime minister who they say has failed to curb unemployment and the increase in the cost of living. Amro Maraghi (c) AFP/Getty Images

Egyptians hold up banners during a protest in front of the parliament building in Cairo in 2004. Some 400 people gathered to protest against the prime minister who they say has failed to curb unemployment and the increase in the cost of living. Amro Maraghi (c) AFP/Getty Images
Listen Now

BRIAN WATT: Here in the U.S., getting a college degree usually opens doors. Better job, better pay and a better lifestyle. But in Egypt, a diploma doesn’t guarantee finding work. The most populous country in the Middle East is facing a severe job shortage. Egypt’s economy must create more than 700,000 new jobs each year to keep pace with the number of college graduates. Marketplace’s Nancy Farghalli reports.

Then there are the stories like this one from Professor Medhat Haroun at the American University in Cairo. He says everyone is looking for work. Shake someone’s hand and then shake them down for a job. A father once begged Haroun for help.

MEDHAT HAROUN: He has three graduates. They are all accountants. They’ve been at home. The problem is that we have many people who are holding degrees and they cannot find a job

That’s why many people say the unemployment rate is double the official number.

HAROUN: Unemployment in my mind is the biggest problem in Egypt. Many people now who cannot afford to live.

That means they don’t have money for rent or for marriage. Professor Said El Raghi says if you land a job, you are often marooned in unfamiliar territory.

SAID EL RAGHI: Very many of graduates do jobs not related to their degrees. Jobs in Egypt are not very demanding.

Lawyers work as cabdrivers. Engineers work as constructions workers. Ahmad Nater is 24 years old. He graduated with a degree in commerce.

AHMAD NATER: Everybody I know is working in a job that doesn’t match his ability or potential. You are supposed to be a highly qualified and you work for 300 pounds for a secretary or an administrative assistant

That’s not enough money to rent an apartment in Cairo. Or take care of unexpected expenses like repairing a car. Going over a pot hole doesn’t help Ahmad’s steering wheel.

NATER: The left part got broken because of an accident and so I melted it.

He now has the money to fix it. He just signed a contract with Vodafone. He’ll earn 1800 pounds a month. And that income means he can get his own apartment and finally marry his very patient fiancA©.

NATER: I have to get married soon because I’ve been engaged for two and a half years.

Ahmad says his good fortune is due to old fashioned hard work.

NATER: Everybody when I tell them that I work for Vodafone, they ask me how did I get there. They make me swear I didn’t get it using any connections

Connections might pave the road to opportunity in Egypt. But agreeing to a night shift job also helps. That’s when you’ll find Ahmad at work.