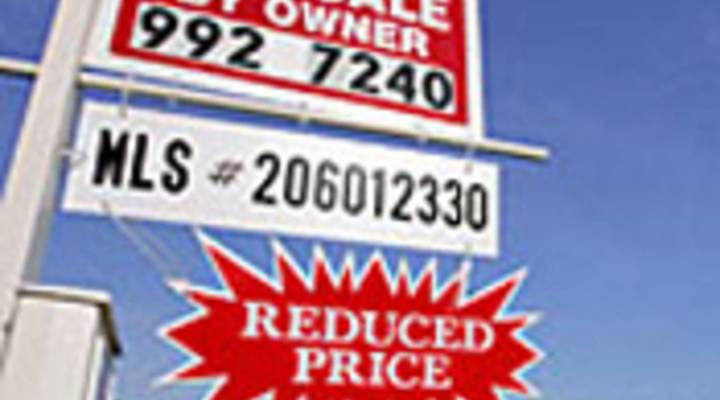 COPY
A "For Sale" sign hangs in front of a home in Naples, Fla., a city that a March 2006 survey declared the most overvalued housing market in the US. Joe Raedle (c) Getty Images

A "For Sale" sign hangs in front of a home in Naples, Fla., a city that a March 2006 survey declared the most overvalued housing market in the US. Joe Raedle (c) Getty Images
Listen Now

SCOTT JAGOW: We’re all kind of wondering if and when the housing market will go from the cooling stage to forming icicles. One of the most watched indicators is the bottom line of home building companies. Yesterday, Toll Brothers said third quarter profits fell nearly 20 percent. So, is that a sign that the winter of housing discontent is coming? Here’s Stacey Vanek-Smith.

STACEY VANEK-SMITH: Toll Brothers’ bottom line has been whimpering. The high-end home builder has seen demand for new housing drop in half. And it’s shelving building plans to build more.

Beacon Economics’ Christopher Thornberg says luxury builders like Toll Brothers usually feel down-cycles first, but, he says, other builders should read the writing the on the wall.

Chilly enough, perhaps, to cool off the economy.

THORNBERG: If the spending on housing relative to the population goes back to its normal, long-run state, that is a large enough shift to basically halve economic growth inside the US. All by itself, for the next two years.

A drop in housing values is also likely to affect consumer spending.

Over the past few years, many Americans have borrowed against he value of their homes. Now that home values look poised to plunge, it could mean a lot of belt tightening in the foreseeable future.