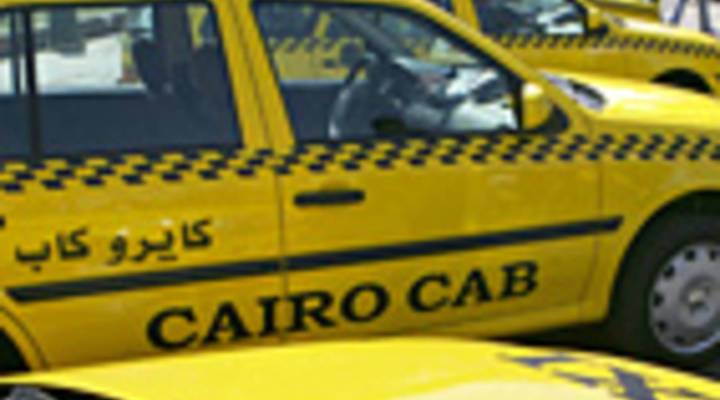 SCOTT JAGOW: If you’re sitting in a nasty traffic jam right now, my heart goes out to ya. Really. In fact, here’s something to make you feel better. You could live in Cairo. Sixteen million people do. And from what I’m told, it feels like they’re all driving at the same time. Cairo’s one of the most polluted cities in the world. But the Egyptian government’s trying to clean things up. Starting with cab drivers. Here’s Nancy Farghalli.

NANCY FARGHALLI: At a busy intersection near Cairo University, Lelia Hamza watches a black and white cab turn left. The driver doesn’t wait for an opening. He just blasts the horn to part the stream of cars.

Leila says that’s typical for cab drivers. They create chaos on the streets. And inside the cab, she says, the environment isn’t much better.

LEILA HAMZA: Usually, they smell. They’re not very clean. And sometimes the driver is smoking cigarettes and the windows are down because the air conditioning is not on. And there’s lots of pollution so it makes me feel sick.

There are roughly 1 million cars in greater Cairo. Twenty-eight thousand of them are black and white taxis and they’re pushing middle age. Cars like Fiats and Peugots have been around since the 70s. And their smoky exhaust has contributed to health problems like high rates of asthma and chronic respiratory conditions. Dr. Mawahab Abou El-Azm is from the Egyptian Environmental Affairs Agency:

MAWAHAB ABOU EL-AZM: We find that the emissions from the cars and the buses and everything in greater Cairo is the cause of 26 percent of the pollution in greater Cairo.

Out with the Fiats and Peugeots. In come 2006 Hyundais, Kias and Volkswagens. Since March 150 new cabs have been roaming around Cairo. They’re bright yellow with the name “City Cab” painted on their doors. The plan is to have 1,500 cabs in service by December. The government even lowered the import tax on the cars for the cab companies. Khalid Mustafa Eunis supervises City Cab.

KHALID MUSTAFA EUNIS [interpreter]: There was a 100 percent duty on the cars. The government cut it to 40 percent. We asked them to reduce it to 10 percent because we are bringing in cars that will run on natural gas, which don’t cause pollution.

And they’ll never let the cars get old. Eunis says his company will only allow the cabs on the street for five years. Then, newer models will be imported.

EUNIS [interpreter]: The cars won’t cause air pollution. Every five years we will have new contracts.

The newer, cleaner yellow cabs are growing in popularity . . . for those who can afford the fare. The rates are up to 25 percent higher than the black-and-white taxis. It’s a luxury ride, especially for the 20 percent of Egyptians who earn less than $1 a day. But the service is unlike anything in Egypt. You can make cab reservations, even if you don’t speak Arabic.

Still, there’s no guarantee you’ll land a cab. I tried three times. Once, the mailbox was full. Another time all the drivers were booked. Finally, I got Idris.Idris drives a yellow station wagon. It’s one of the few clean-burning cabs in Cairo. He says tourists are more comfortable in the yellow cabs. They have seatbelts and something that’s missing from the older cabs.

The drivers, like Idris, are trained to ask a series of questions. Air conditioning: On or off? Radio: On or off?

Idris quickly scans the radio. He picks a station based on his impression of the passenger. Usually it works like this: Egyptians get Arabic music. Foreigners like me get . . . . [Music of the band Cold Play.]