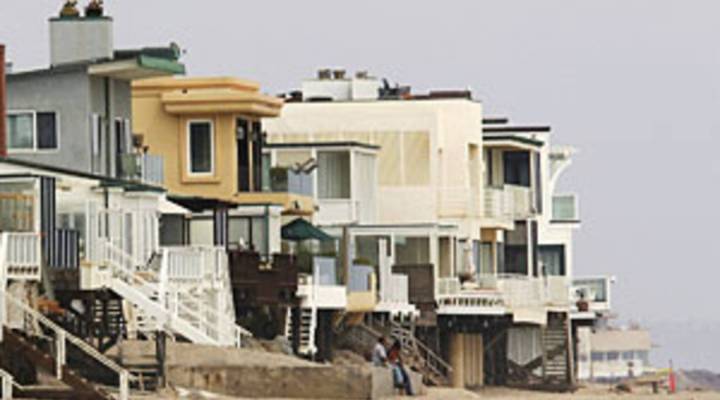 KAI RYSSDAL: How’d you like to go to London? Maybe Sydney? Or Paris? Now, how’d you like to stay there for free? You can, but there’s a catch. You have to let somebody stay at your house also for free. It’s called home-swapping and it’s a popular way to vacation on the cheap. We asked Marketplace’s Tess Vigeland to look into how it works and why people are more than willing to invite strangers into their homes.

TESS VIGELAND: Gordon Schaye and his wife Carmen have lived on their seven-acre ranch south of Los Angeles for 10 years.

GORDON SCHAYE: “Show you our animals over here in the corrals. We have six geese, we have two goats and two sheep

VIGELAND: And is this something that anyone who stays at your home needs to deal with?

GORDON SCHAYE: No nobody has to deal with it. No, no we have somebody who comes in and takes care of the animals every day. Unless they want to!”

The house on a hill boasts a spectacular view of Pacific coastline from the island of Catalina to Malibu. There’s a pool in back and a porch swing hanging from a tree in front.

The Schaye’s primary residence might as well be a vacation retreat. And for numerous US and European visitors, it is.

The Schayes are part of a growing vacation phenomenon called home-swapping. You go online, offer your home, decide where you want to go, figure out the dates, then swap.

GORDON SCHAYE: “We had an apartment on the upper east side of Manhattan, four bedrooms with a doorman and a car. We exchanged for a home in the Berkeley hills and the people stayed here. We’ve gotten offers in the last month from Paris, from London, from Rome.”

Often home swappers will care for one another’s pets. They’ll use each others’ cars. Many leave a detailed book for their guests. They’ll provide information about local sights — and menus from nearby restaurants. They arrange beforehand who’s responsible for paying for things like plumbing emergencies.

Gordon and Carmen say there are all kinds of benefits to vacationing in someone else’s house.

CARMEN SCHAYE: “One of the things that is very, very attractive about it is that you really get a sense of the culture and the lifestyle of a community as opposed to being a tourist.

GORDON SCHAYE: “I think one of the big upsides is financial, you $200-$300 a day on a hotel. You save on restaurants, you can cook at home and one thing about being at home, the kitchen’s always open.”

They’ve only had one troubling incident in the dozens of swaps they’ve conducted.

GORDON SCHAYE: “We had a person who represented herself as owning a villa in Europe and I don’t think she ever owned anything and she stayed in our guest house and then she started annoying the neighbors so much we had to ask her to leave and that was our only bad experience. And it was well worth all the pleasure that we’ve gotten out of all the other trades.”

The Schayes use an online service called HomeExchange.com. Later this year the site will get the kind of publicity most companies only dream about: It’ll be featured in a movie starring Cameron Diaz and Kate Winslet.

Ed Kushins founded the company in 1992. He says the business has changed since then.

ED KUSHINS: “Ten years ago it was primarily teachers and retired people. But over the last 10 years we’ve seen a steady equalization of the demographics and now it’s young singles, young families . . .”

And, still, retired couples, especially boomers with second homes. It costs $60 a year to join HomeExchange.com. And after that there’s basically no cost except transportation to your swapped home.

Jessica Jaffe is with Intervac.com, the first-ever home exchange company, founded in 1953.

JESSICA JAFFE: “In Europe a lot of these homes and apartments are maybe 500 years old so you’re going to be dealing with homes that have a lot of charm, but the facilities might be a little different, so you should keep that in mind.”

But the biggest hurdle — and the first thing people tend ask about — is how to get over concerns about letting strangers stay in your home.

Doris Sundly and her husband Jerry have been handing over the keys to their Craftsman house in Long Beach since 2001. It’s three and a half blocks from the sand.

DORIS SUNDLY: “We just last week had a couple stay here in our home from Toronto. You just have to have this kind of trust thing. The quality of people that do this, they’re just great people.”

Exchange Web sites do provide contracts to sign saying each party is responsible for paying, say, if somebody breaks a dish. There’s no money exchanged so most home insurance companies consider home swappers just guests. Still you should check with your insurer.

And then, start swapping.