MARK AUSTIN THOMAS: The Tour de France is underway, but for the first time in years, Lance Armstrong isn’t there. In fact, when you look around there’s a generation of sports legends heading for the door. Andre Agassi just played in his last Wimbledon. Roger Clemens is back with the Astros, but for how long? David Carter is the Director of the USC Sports Business Institute.

DAVID CARTER: We’ve seen David Beckham give up his captainship of the national team in England. We saw hockey great Steve Yzerman also hang up the skates after 22 years. So I think there really is a changing of the guard underway, but I really wonder if it’s just because guys and gals maybe in their late 30s and 40s are starting to see this because these are the athletes we watched, these are the ones that we saw mature in front of us, these are the athletes we saw succeed. And in many respects these athletes were the first ones to have their entire careers through that ESPN generation.

MARK AUSTIN THOMAS: Sports teams and product sponsors depend up on and in fact they really need sports stars. What’s the business impact for them when legends like Lance Armstrong or the NHL’s Mario Lemiuex hang it up?

DAVID CARTER: I think a sport or a company can really drift if another icon can’t be found. I think this is especially the case for emerging sports or sports that are on the rebound. I think it’s going to be very critical to find suitable replacements. And I think if you look at these athletes that we’ve had retire of late, they’ve really been transcendent characters. They haven’t just been marketing themselves, but they’ve been marketing their sport, the team that they play for and of course the companies and organizations that they endorse. So there is quite a void in the marketplace and if they don’t step up and find someone suitable it could create some havoc.

MARK AUSTIN THOMAS: It wasn’t this way 20 years ago before ESPM and 24-7 coverage. How do you think the relentless news cycle in sports affects today’s stars — or are they so used to it because they’ve grown up in it?

DAVID CARTER: I think this emerging series of athletes, they don’t know it any other way. They’ve never had it any other way with respect to the 24-7 media coverage. I think for a lot of them it’s like the old Jim Carrey movie, The Truman Show, always in the spotlight, always in the glare and I think that they have really gone out of their way to manage their careers appropriately. Now that’s not to say it doesn’t come back to haunt them. You talk about the blogs that are out there, the fantasy sports leagues that have popped up and that seem to be everywhere. This immense and total coverage of these athletes has also made the way they handle themselves publicly and privately change, so it’s quite a new dynamic for this new generation.

MARK AUSTIN THOMAS: I’m thinking about extreme sports as just one example, but I’m wondering if there are new sports that are already creating stars that we don’t quite know about yet.

DAVID CARTER: Well I think that’s true and I think action sports is going to be critical. You see guys like Shaun “the Flying Tomato” White now coming onto the scene, not replacing legends like Tony Hawk, but again that next generation. But I think you can look elsewhere. You mentioned Mario Lemiuex, you have Sidney Crosby in Pittsburgh who might be helping re-launch the National Hockey League. So it’s not just emerging sports, but sports that are really in need of a turnaround. Even in New Orleans you have former USC star Reggie Bush playing for the New Orleans Saints in the NFL and that franchise really hopes that he can help turn it around. So it’s sports in general looking for a new star at really all levels from emerging to established sports leagues.

MARK AUSTIN THOMAS: David Carter is director of the USC Sport Business Institute. And in Los Angeles, I’m Mark Austin Thomas. Thanks for joining us. Have a great day! 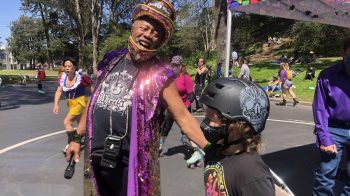