TESS VIGELAND: On this July 4th, I hope the weather is cooperating where you are. It’s hot here in sunny SoCal, a perfect day for the beach. One thing you notice on our beaches: Even the garbage cans and volleyball nets come with advertising. Seems there’s nowhere that’s safe from ads anymore, certainly not the movie theater. In fact, Marketplace’s Lisa Napoli tells us the fastest-growing advertising medium is the one you watch with a tub of popcorn in your lap.

LISA NAPOLI: When Volkswagen debuted its new luxury car, the Phaeton, this past winter, it didn’t launch a network television ad campaign.

The automaker’s marketing people bought ads in a group of small but upscale movie theaters around the country. All the better to reach the upscale customers for whom the car is intended. Robert Faust of Arthouse Marketing, which represents the theaters, said the ad looked like a documentary:

ROBERT FAUST:“Their creative was fantastic. You couldn’t tell it was an auto ad, or else it wouldn’t have flown, you know the exhibitors would have vetoed it.”

The exhibitors, meaning the movie theater owners, consider movie ads an important part of their business. They make five times more selling ads than selling concessions.In the last five years, ads at the movies in fact have become about as common as popcorn. Some people think they’re as annoying as that other growing cinema phenomenon: cell phones.

Being able to target a specific audience is one of the great lures of advertising at the movies. Say, the arthouse demographic who might buy a $65,000 car or beer-drinking action types who might go see a Bruce Willis film. And there’s another:

Jason Brown’s with Screenvision, which places ads on more than 25,000 of the nation’s 31,000 screens. The captive audiences movies provide are as alluring to advertisers as Reese Witherspoon is to producers.

BROWN: “Because of the lessening impact of traditional media like television, cinema has grown.”

To the point where it’s now the fastest growing type of advertising there is.

All of this disturbs Mark Weinberg. He said he was speaking for all moviegoers when he filed a class action lawsuit against the national chain, Loews Cinemas . . .

MARK WEINBERG:“. . . accusing them of committing consumer fraud by duping them into coming in to the movies early so they could foist commercial advertisements upon the consumers. They’re stealing people’s time.”

Weinberg says if theaters are going to run ads, at least they should tell you when they start so you don’t have to suffer through them. A circuit court judge threw out the case, but Weinberg just filed an appeal.

WEINBERG:“As it is there’s like an X-factor when you go to the movies now. No one knows how long the previews and commercials are going to last.”

Meanwhile, Robert Faust of ArtHouse Marketing says people are getting used to ads at the movies, anyway. And the trick is to keep them interesting and fun.

FAUST:“The audience gets a little edgy sitting there in the dark room, with nothing on the screen. If you can ad a laugh before the film, it’s a wonderful thing.”

Although that’s creating a new problem for Hollywood: ads that are more entertaining than the films. 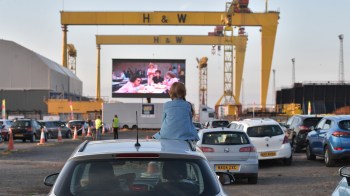