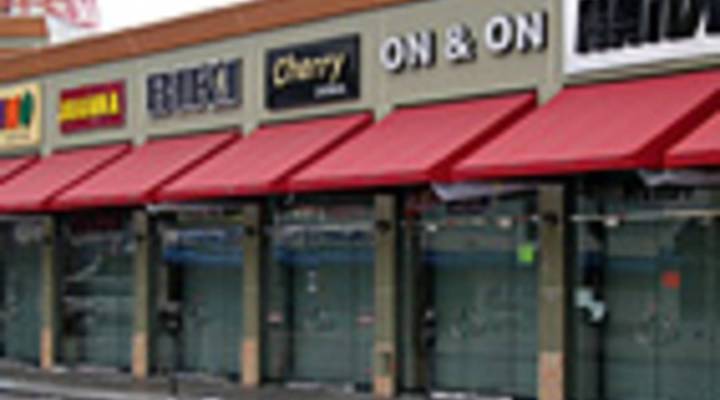 Will the boycotts matter?

A street in downtown Los Angeles lined with wholesale fashion retailers with steel gates rolled down, closed for the May 1 protests and boycott. Tess Vigeland

Will the boycotts matter?

A street in downtown Los Angeles lined with wholesale fashion retailers with steel gates rolled down, closed for the May 1 protests and boycott. Tess Vigeland

A street in downtown Los Angeles lined with wholesale fashion retailers with steel gates rolled down, closed for the May 1 protests and boycott.

Clothing racks sit on sidewalks in LA’s downtown Fashion District — but on this “Day Without Immigrants” there are no customers to buy them and few workers to sell them.

Felix Seoh and several workers stand in front of his store, Zoompy, in the downtown Los Angeles fashion district. It opened on this “Day Without Immigrants” to accept shipments, but closed later so employees could attend rallies. Seoh is Korean and has lived in the US for 17 years.

Richard is a salesperson at clothier Imagine at the San Pedro Wholesale Mart. He worked a couple of hours on “A Day Without Immigrants,” until the shop closed so workers could join the march in downtown LA.

A toy store with its metal doors still rolled down on what is usually a busy Monday morning.

The Los Angeles Toy District sits empty of store owners, workers and customers on “A Day Without Immigrants,” Monday, May 1.