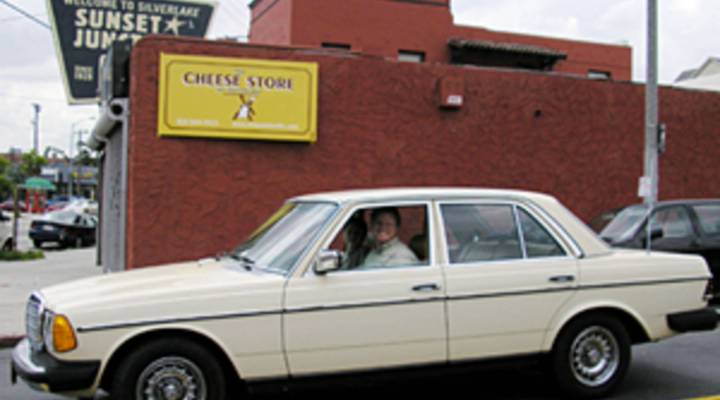 Ben and Caleb Harrison head home to Alabama from Los Angeles, where they had their 1982 Mercedes 300SD converted to use biofuel. In the backseat: several five-gallon containers of soybean oil from Costco. Photo by Tess Vigeland

Ben and Caleb Harrison head home to Alabama from Los Angeles, where they had their 1982 Mercedes 300SD converted to use biofuel. In the backseat: several five-gallon containers of soybean oil from Costco. Photo by Tess Vigeland

KAI RYSSDAL: By now it’s all about the leftovers. Turkey sandwiches. Turkey soup. And, turkey grease. You know, that brownish slimy stuff left in your roasting pan can actually be food for your car. Some companies are converting turkey gunk, and all kinds of other gunk, into what’s called bio-fuel. And the buzz over bio-fuel continues to grow, so what’s involved in switching to those alternatives? From the Marketplace Sustainability desk, Tess Vigeland reports.

TESS VIGELAND: I met up with Ben Calderwood at his apartment in Brentwood on the west side of Los Angeles. He’s a copyrighter for an ad agency. When he goes to fill up his tank, he stops first on the front porch.

BEN CALDERWOOD: So three 5-gallon fuel containers. I’m gonna grab this one — they weigh a ton — and we’ll walk around.

Calderwood’s 2003 Volkswagen Jetta sits parked just around the corner. He pops open the fuel door and unscrews the gas cap.

The fuel sitting on his porch was no danger to passers-by. It’s biodiesel, a mixture of methanol –wood alcohol — and some sort of vegetable oil.

The Jetta was already a diesel car, so Calderwood didn’t have to do anything to convert it to biodiesel. He buys the fuel at a nearby gas station, one of very few in the LA area that sells it. This week it’s going for $3.49 a gallon. Hardly sounds like a bargain, but he estimates he gets up to 650 miles a tank on the freeway — about 8 cents a mile. As for the rest of us:

VIGELAND: I will admit, it’s an SUV. It’s a Honda Passport.

CALDERWOOD: So maybe, maybe you’re getting 30 miles a gallon on the freeway, something like that.

CALDERWOOD: So easily, on a per-mile basis, you’re paying more, even though my fuel is more expensive than yours.

A few miles south, Josh Tickell takes his biodiesel commitment a step further. He makes and pumps his own.

JOSH TICKELL: We’re standing in the backyard of my Venice Beach house here. And as you can see, I’ve got some various drums of biodiesel.

VIGELAND: And what is that made from?

TICKELL: It’s made from used cooking oil. Actually got it at the Mexican restaurant down the street.

Tacos and methanol, mmm. Tickell is the author of several books about biodiesel, including “From the Fryer to the Fuel Tank.” He says the basic gear costs a couple hundred bucks, but users see more long-term benefits.

TICKELL: What they find in terms of engine wear, is engine friction goes down dramatically. So what you’ve got is an engine that’s lasting 30, 40 or 50 percent longer.

There’s another option that, again, as long as you already own a diesel car, costs relatively little. It’s 100 percent veggie oil, without the methanol.

Lovecraft is a biofuel conversion shop just outside downtown LA. For $700, they’ll take your old Mercedes and make it run on soy bean, canola, whatever you choose. Brian Friedman started the company.

BRIAN FRIEDMAN: It’s a fairly simple, maintenance-free system. You can use it as a daily drive or to get to work and back reliably. There’s nothing you have to really learn to drive it.

More than a dozen ’80s vintage Mercedes sit in the lot awaiting conversions. It takes four hours, and Lovecraft does about five a day. Ben Harrison and his son Caleb picked theirs up this week, and were headed home to Elkmont, Alabama.

BEN HARRISON: We bought a Mercedes from a gentleman who had sold Mercedes on eBay. So we flew out here last night, picked up the car, Brian had already converted it to veggie oil. We’re on our way back.

VIGELAND: And what’s the cost benefit for you?

HARRISON: Well, at $3 a gallon, diesel, you’re looking at $60 to fill up a tank versus pennies of the waste vegetable oil.

The warranty on Harrison’s 1982 car expired long ago. Most recent diesel cars in the US come from Volkswagen, and the warranty could be a problem. They only allow biodiesel, not pure veggie oil, and then only a 5 percent formulation.

Bio fuel users don’t get any insurance breaks. No tax breaks yet, either, those are reserved for hybrids.

Of course, most people who run biodiesel will tell you they’re not doing it for purely economic reasons. They say the true costs of fossil fuel are far greater than what you pay at the pump.