Helping the folks back home

Helping the folks back home

INTRODUCTION: People from the tiny Central American nation of El Salvador have a powerful, almost inexplicable bond to the place where they were born. This remains true even decades after they leave their hometown in search of economic opportunity. In destination cities like Los Angeles and Houston, Salvadorans raise money and hope for their longed-for hometowns. From the Americas Desk at WLRN, Dan Grech tells the story of the devoted citizens of one village.

DAN GRECH: Francisco Castro and his family left El Salvador at the start of its 12-year civil war. They settled in Fairfax, Va. In 1991, as the war was ending, Francisco took his son Mauricio back to his hometown of Chinameca. Mauricio says the village was falling apart.

MAURICIO CASTRO: Next to my grandmother’s house, there was a church. It was already built, structure-wise, but they ran out of money. It wasn’t painted, there were people sitting on buckets, there were no benches. That’s how they would have Mass there. So they approached my dad to somehow help them out.

When Francisco returned to Fairfax, he sponsored Salvadoran dinners in his basement — 20 bucks a plate. Now he throws concerts in Virginia with El Salvador’s biggest bands.

Over fifteen years, he’s helped raise half a million bucks for Chinameca.

Today the church in Chinameca has new floors, a new roof and bench seating for 200. Its bell tolls for Sunday evening mass. As the townspeople file in, they drop what they can into a basket. It comes to 68 cents.

The man who rings the bell has a message for his hermanos back in Fairfax. It’s the bell, he says. It’s much too small.

The church deserves a bell that sounds like this: [sound of bell ringing]

Mauricio says his father came to learn that the needs of his little town are inexhaustible.

MAURICIO: When he went back, 10 years later, he would have his old friends, living on the street, asking him for money like bums. “Oh, we went to school together, can I get some money?”

Francisco formed a hometown association with other Chinameca migrants in Virginia. They built a school, installed a septic tank and added a children’s park in their hometown. They even bought a used Ford ambulance for $32,000 and drove it all the way to El Salvador. But the ambulance soon broke down. It wasn’t built for unpaved mountain roads.

The association raises money any way it can. It once made a few hundred bucks selling a homemade CD of songs pining for their little village. Now the association has big-name sponsors like United Airlines and Sprint. Budweiser alone has given $100,000.

Salvadorans in turn use those brands to show their gratitude. Bud Light’s market share among Hispanics in Virginia has grown from nothing to 13%. The association has become more careful with its donations. It now funds projects that generate income, like this tree nursery.

NURSERY WORKER [TRANSLATION]: We got mangoes, we got mariñones, chocolate trees over here and coffee trees over there, also.

The seedlings are sold to fruit growers to plant in the deforested hillside. Along with these fruit trees, it’s hoped a new town will blossom. 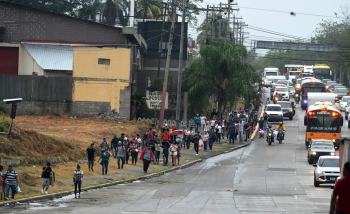