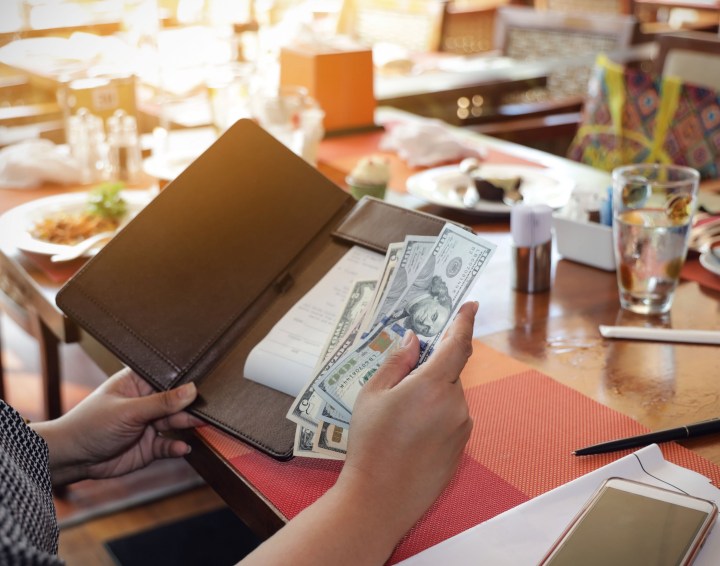 Why on Earth is the dinner bill called a check in the restaurant instead of just the bill? “Check, please!”

Whether you’re asking your waiter, “Check please!” or telling your dinner partners that you’ll “grab the check,” the term has become so common in our lexicon, it’s easy to miss that it’s a puzzling choice compared to the more literal term “bill.”

One of the earliest known references to the use of “check” at restaurants dates back to the 1869 novel “Patience Strong’s Outings” by Adeline Dutton Train Whitney, which includes the line “I let her settle for the dinner checks.”

There are other references to restaurant checks throughout the 19th century, including an 1870 article from The New York Daily Herald that said “waiter leaves check for $1.45 on table” and an 1883 clipping from The Courier-Journal in Louisville, Kentucky, that includes the phrase “Check, please!”

One of the entries for “check” listed in the Oxford English Dictionary defines it as: “A means to ensure accuracy, correctness, security from fraud, etc.,” which experts agree is how the term “check” was originally used.

“The conventional wisdom is that the check (an Americanism) dates to the mid-nineteenth century and was used because the bill served as a means of checking what dishes were being charged,” explained Andrew Haley, an associate professor of American cultural history at the University of Southern Mississippi and author of the book “Turning the Tables.” “Everything was a la carte in nineteenth century restaurants and patrons ordered a lot of dishes.”

“The Back of the House,” a book on New York’s Commodore Hotel published in 1925, sheds light on how the checking process worked at restaurants at that time, said Rebecca Spang, a history professor at Indiana University, Bloomington, and author of “The Invention of the Restaurant.”

“It details that restaurant patrons’ orders are taken ‘on a restaurant check by a waiter,’” Spang said over email. “The waiter gets the order, goes to the kitchen to collect required items, and then (my favorite bit) stops at the ‘checker’s counter for inspection’— if the ‘checker’ finds he’s gotten all the right things, he’s good to go back into the dining room!”

So the term “check” isn’t related to concepts like a checkbook or the exchequer, as one might expect, Spang said. (In medieval England, an exchequer was a department or office tasked with collecting royal revenue.)

The check helped keep everyone honest because there was a culture of distrust in eateries during the 19th century and early 20th century, according to Haley.

Haley explained how restaurant operations at the time bred those suspicions. Well-heeled restaurants in the 19th century didn’t have the plate dinners we have now, which come with, say, vegetables, a starch and a protein.

Back then, depending on how much time you spent there and how fancy the dinner was, there could be three to seven courses, or even more, Haley said.

If you look back at the history of menus in the U.S., they were far bigger than they are now.

“There were a lot of dishes moving back and forth, and this created some opportunities for abuse,” Haley said. “Waiters could slip in extra charges. If, at the end of the day, you were ordering dozens of dishes, somebody might not notice whether there was an extra plate of corn or peas that had been served up.”

To hold everyone accountable at some eateries, checks would be put in front of you on the table, where you could see exactly what you were being charged for, Haley said.

He explained how a scam might have worked: “The waiter adds items to the bill, and the waiter — or, perhaps a head waiter who is in cahoots — collects the payment. But they only give the restaurant the cost of the food actually ordered, and they pocket the extra.”

However, Haley said, some patrons were distrustful not because of violations, but because they were prejudiced.

“Waiters were on the one hand, foreign, and on the other hand, people who had an expertise that you — who might be of a higher class — didn’t have,” he said.

“So right away, the relationship is fraught,” Haley said.

Restaurants that catered to the masses in the 19th century were chaotic spaces that would receive a rush of business during lunch, Haley said, so errors in adding up the order could occur too.

Management was also concerned about waiters cheating their employer by being too generous with customers.

“Waiters could give away freebies to try and encourage a higher tip. Tipping wasn’t a percentage at this time, so there was no incentive to raise the cost of the bill,” Haley said.

Then, there was also the potential for fraud by patrons. The Pittsburg Post noted in 1901 that some customers would order separate items from another part of the restaurant. They would collect two “checks” detailing the food they consumed, but only present one when it came time to pay.

Restaurants were so worried about ripoffs that they would “routinely put warnings on their menus in a way that we would find extraordinarily crass, asking their customers to be wary of cheating that was going on,” Haley said.

Haley pointed to a 1914 menu from a New York restaurant called Riggs that states: “Place a check on the table immediately in front of each customer, the moment you serve the order, and if the customer puts it in his pocket, ask him to please leave it in sight.”

Haley observed that the checking process has influenced how we dine today in that we get our receipt prior to paying so we can verify what we ordered.

Yet we take it for granted that other businesses don’t follow the same practice.

“If you go to a store and buy a bunch of shirts, you bring them to the cash register, they ring them up in front of you,” Haley said. “You don’t see the bill until you’ve actually paid. You hand them the money, and then you see the list of items you bought on a receipt.”

Special thanks for research contributions from Gerald Cohen, a professor at Missouri University of Science and Technology; Peter Reitan, pop-culture history researcher; and Barry Popik, a writer, lexicographer and food historian.