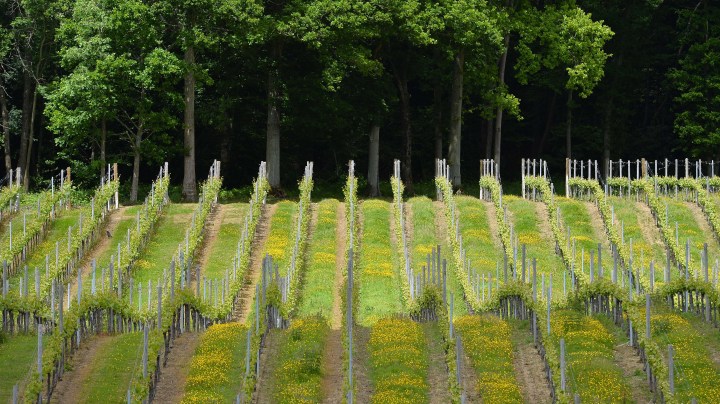 COPY
Rows of vines cover the hills at a Sussex County vineyard in 2015. The government honored the county's white wines with a Protected Designation of Origin. Glyn Kirk/AFP via Getty Images

Rows of vines cover the hills at a Sussex County vineyard in 2015. The government honored the county's white wines with a Protected Designation of Origin. Glyn Kirk/AFP via Getty Images
Listen Now

Once an international laughingstock, English wine now goes from strength to strength, thanks largely to climate change. Rising temperatures, especially in the south, have hugely improved the quantity and quality of English vineyards’ output.

In the latest sign of the growing regard for this once-maligned product, white wine (sparkling and still) from the southern county of Sussex has just been awarded a Protected Designation of Origin, or PDO — a kind of trademark for agricultural produce.

Sussex wineries are celebrating, but at least one vineyard owner from the neighboring county of Kent is not so happy.

This PDO, awarded by the British government and enforced against foreign producers through trade agreements, means that wines can be labeled “Sussex” only if they have been grown in that county, made in accordance with local tradition and aged for at least two years.

This gives it the same level of protection as the world’s preeminent sparkling wine, Champagne. It emphasizes the importance in winemaking of what the French call “terroir”:  the climate, soil, elevation and other physical attributes of a particular vineyard.

“This is the perfect place to make wine,“ said Art Tukker, standing among his vines in the Tinwood Estate, near Chichester in Sussex on the south coast of England.

“On our south side is the ocean, which gives us the temperate climate, which saves us from the frost in the springtime. And we have the ideal soil — lots of flint for drainage and half a meter of pure white chalk. It produces a very fresh, very mineral, very clean-tasting wine,” Tukker said. “We’ve got a very special place, a special soil to produce these world-class sparkling wines here.”

These qualities helped Sussex wine win the PDO, a terrific marketing boost. It has Tukker hoping that he and his fellow winemakers might one day challenge the global dominance of Champagne, the world’s most famous fizz. Could people one day say, “Let’s celebrate! Let’s have a glass of Sussex!”?

Some 70 miles away, in the neighboring county of Kent, another winegrower — Graham Barbour, founder and owner of the successful Woodchurch vineyard — is rather less enthusiastic about Sussex’s PDO award.

“It’s a shame that you’re singling out a county and saying the wine produced from that county is somehow unique and of superior quality because of the soil that it’s sitting on,” Barbour complained.

“Choosing a county is just arbitrary,” he said. “You can talk about a particular valley, a particular set of hills, but choosing a whole county is arbitrary. You can go to lots of other places in different counties around England and taste fantastic wines too.”

And you can go to some places in Sussex where the wine is not that good? “That would be the inference of what I’m saying, yes,” Barbour said.

Back in his Sussex vineyard, Art Tukker is still enthusing about the PDO, which he believes will bring the Sussex label to the attention of wine drinkers in Tokyo, New York and perhaps even Paris. He shrugs off the assertion from Kent that the PDO was awarded arbitrarily.

“The guys in Kent would say that, wouldn’t they?“ he laughed “Because they haven’t got their own PDO!”

And he served up the inevitable jibe: “Kent producers have probably got a case of sour grapes.”

But maybe the Kent winegrower has a point. Champagne, the ultimate PDO wine, encompasses parts of eight different counties — or departements — in France. It is not confined within the boundary of just one county.