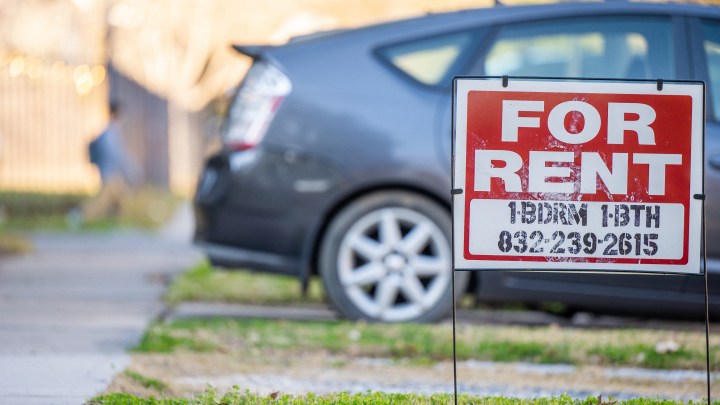 COPY
Rent for one-bedroom apartments went up .5% from May to June, which is less than previous months, according to data from Zumper. Brandon Bell/Getty Images

Rent for one-bedroom apartments went up .5% from May to June, which is less than previous months, according to data from Zumper. Brandon Bell/Getty Images
Listen Now

A big part of inflation, besides gas prices and food prices, is rent. Rents are still rising year over year at a dizzying pace, but there may be signs that those increases are slowing down.

Hyung Joo Park lived, until recently, alone in a walkup studio a few blocks from Times Square. “I lived there for a year, and I used to pay $1,900 per month.” Then came time to renew the lease in March.

And he got a roommate. When he moved in April, average rents in New York were up 32% year over year — the most in history, according to brokerage Douglas Elliman.

Nationwide, rents last month were up around 11% to 14% year over year, depending on your data.  But the madness may soon be slowing down.

“In the last 30 to 45 days, you’re really seeing a taper off in the growth rate,” said Anthemos Georgiades, CEO of Zumper, an apartment marketplace.

From Zumper’s data, one-bedroom rents were up .5% from May to June, which is less than previous months. Two-bedroom rents actually went down 2.9%.

“So, rents are still up year on year, but the growth rate is decelerating,” Georgiades said.

There are still some things holding rents up though.

Higher mortgages, he said, may tip some homebuyers into home renters and add to demand. Zumper’s Georgiades said that’s most true for single-family units.

New housing supply is coming online, said Mark Zandi, chief economist at Moody’s Analytics. That should help over the next year.

“Even now, the number of multifamily apartment units being built is very high by historical standards — about half a million per units per annum.”

At some point, likely this year, Miller and other observers say rents are going to stabilize. But stabilizing does not mean coming down. They’re more likely to simply move “sideways” or “plateau,” Miller said.

People simply have less money to spend on rent thanks to inflation. And rent itself is a big part of inflation.

“Shelter inflation accounted for a little under half of the overall acceleration we’ve seen in core inflation since April 2021,” said Laura Rosner-Warburton, a senior economist at MacroPolicy Perspectives.

There’s a six-month lag in reporting rent inflation to the government, so even if rent inflation slows down, it will be months before that shows up in the data. Even then, rent inflation will still be a force to reckon with in inflation.

He said it will add about a half-point to total inflation for the foreseeable future.