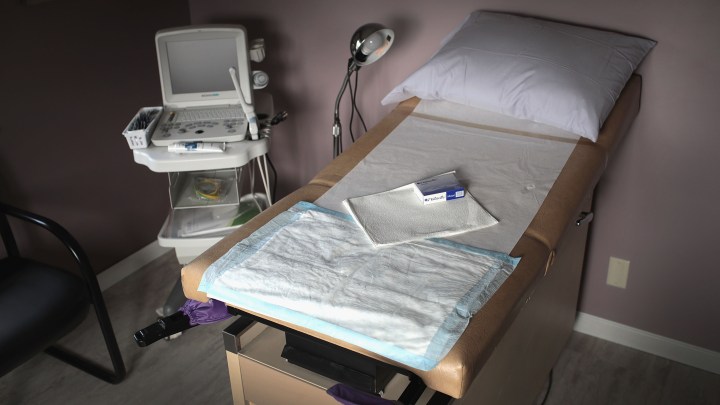 The Supreme Court’s overturning of Roe v. Wade forced a seismic shift in reproductive health care access for people in the U.S.

Trigger laws are on the books in more than a dozen states and when the Court handed down its decision on June 24, eight states could begin enforcing them.

But legal battles over trigger laws have already ensued. In Lousiana, Texas, Utah and Kentucky, abortions are accessible — for the moment — as judges deliberate the legality of abortion bans. A Mississippi judge recently refused to issue an injunction blocking the state’s severely restrictive abortion ban, which goes into effect Thursday.

While states where abortion is still legal prep for an influx of out-of-state patients, at least several clinics have curbed the services they offer to patients from out of state. And, as some states eye potential travel bans for those seeking abortion care, it leaves reproductive health care workers in a state of confusion, frustration and anger.

Now, some are asking themselves: Should I stay here, where the care I provide is criminalized or heavily restricted, or should I go to a state that’s friendlier to health care access?

For those who stay, care is made even more complicated

For providers who remain in the states that have banned or severely restricted access to abortion, determining what care can be provided — legally — has become messier.

“This is really a situation where it’s ultimately like a full-time job to be tracking the restrictions and what they are, how they’re developing, what can be accessed, and that’s really creating a lot of challenges,” Payal Shah, director of Physicians for Human Rights’ Program on Sexual Violence in Conflict Zones, told Marketplace.

The parameters of many state trigger laws are vague, to say the least. In South Dakota, for example, abortions are illegal “unless there is appropriate and reasonable medical judgment that performance of an abortion is necessary to preserve the life of the pregnant female.”

But when is a medical issue life-threatening enough? Many physicians are left wondering.

“There is a real chilling effect that comes from criminal laws on abortion that goes beyond what the words are on the page,” Shah said. “It can often lead to a chilling effect for providers to not even want to engage with patients who are coming in bleeding because they’re afraid of the legal liability that they think that they may have.”

Shah, who has studied access to reproductive health care around the globe, points to the Philippines. There, abortion is illegal, but post-abortion care is not.

“What we often saw was providers really hesitant to provide this care, because they’re not aware of the scope of the law. And so there’s a real chilling effect on access to any form of pregnancy-related care, because of their fear of prosecution,” Shah said.

What about a person who has a miscarriage, for example? The procedures to treat a miscarriage are sometimes the same as those in elective abortions. Abortions rights advocates also point to ectopic pregnancies, in which a fertilized egg attaches outside of the uterus. These pregnancies are not viable and are life-threatening if left untreated; treatment for ectopic pregnancies involves the termination of the pregnancy.

The impact of delaying treatment for patients due to fear of criminal prosecution is not in a patient’s best interest. Dr. Maureen Phipps, Chief Executive Officer of the American College of Obstetricians and Gynecologists, put it bluntly in a June press conference:

“This will leave physicians looking over our shoulders, wondering if a patient is in enough of a crisis to permit an exception to a law. It leaves them fearing the evidence-based care that they are providing is leaving them susceptible to discipline, punishment, lawsuits, loss of license and criminal penalty.”

Leaving is easier said than done

According to reporting by Politico, some reproductive health care workers in states where abortion is outlawed are planning on working part-time in neighboring states friendlier to abortion care; others are eyeing moving out of state altogether.

Some states, like Maryland, are prepping to become havens for safe abortion access. There, the pool of workers eligible to perform abortions has been expanded to include physician assistants, nurse practitioners and nurse midwives.

But states that outlaw or restrict abortion bans already have higher infant and maternal mortality rates. A potential exodus of reproductive health care workers could exacerbate these problems even more.

Those health disparities also butt up against another stark reality: the fact that millions have already left the health care work force during the Great Resignation. And some fear that legislative interference in health practices can put a damper on the recruitment of trained health care professionals, too.

Still, plenty of abortion care providers in states hostile to abortion care have said that they don’t intend on leaving. They have families and homes; they’re a part of communities. Some offer additional reproductive health care and family-planning services that will keep them busy. Many recognize that where they’re operating may already be a reproductive health care desert — they don’t want to see it get worse.

Plus, even if they no longer provide abortions, some physicians are reorienting their efforts to connecting patients with abortion funds or other ways of accessing abortion care outside of their state.

For many involved in reproductive health care, the thinking behind staying or leaving boils down to the same reason: helping patients get the care they need.

“I am very committed to returning to Georgia and returning to the South, which is my home, and I know many of my colleagues are,” said Molly Meegan, chief legal officer for the American College of Obstetricians and Gynecologists, during a June press conference. “We are going to stay in these restrictive areas and will continue to support people in whatever way we can.”