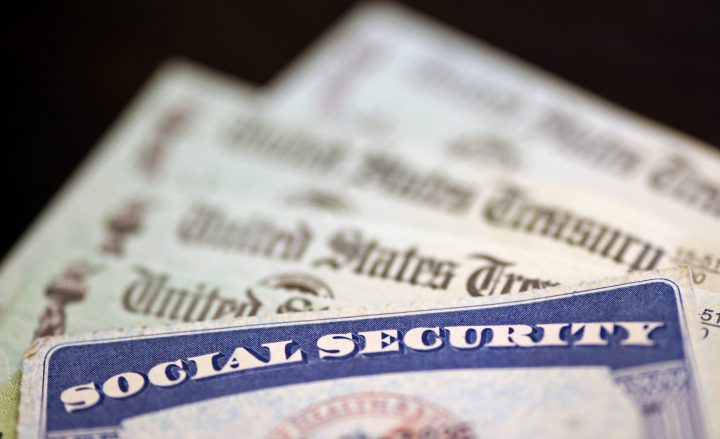 COPY
In this photo illustration, a Social Security card sits alongside checks from the U.S. Treasury on October 14, 2021 in Washington, DC. The Social Security Administration announced recipients will receive an annual cost of living adjustment of 5.9%, the largest increase since 1982. The larger increase is aimed at helping to offset rising inflation. Kevin Dietsch/Getty Images

In this photo illustration, a Social Security card sits alongside checks from the U.S. Treasury on October 14, 2021 in Washington, DC. The Social Security Administration announced recipients will receive an annual cost of living adjustment of 5.9%, the largest increase since 1982. The larger increase is aimed at helping to offset rising inflation. Kevin Dietsch/Getty Images
Listen Now

The average Social Security check right now is right around $1,500, which is not exactly enough to live on for most people. So what can you do to increase that amount when you retire, short of getting a job that pays a really high salary while you’re still working?

There is one thing, and for that, “Marketplace Morning Report” host Nova Safo chatted with senior economics contributor Chris Farrell. Below is an edited transcript of their conversation.

Nova Safo: So … that one thing is?

Chris Farrell : Delay filing for Social Security. Social Security is the financial foundation of retirement in the U.S. The earliest you can file for retirement benefits is age 62. The latest is age 70. You’re rewarded for each year that you wait. The benefit is about 76% higher if you file at age 70 compared to age 62.

Farrell: The most popular age for filing is 62. According to the Center for Retirement Research at Boston College, 34% of women and 31% of men who claimed retired-worker benefits in 2019 were 62 years old. That said, the long-term trend has been for fewer people to file at that age. A small percentage wait until age 70. There is no additional benefit after that birthday.

Safo: People filing early worry that they’ll die soon, and they want to make sure they get something back from the payments they made into the system while working?

Farrell: In many ways that’s the crux of the issue. But Social Security pays an inflation-adjusted benefits for life. It’s essentially longevity insurance, which is especially important for women who tend to live longer yet earn less during their careers. Put it this way: You may outlive your savings, but you can’t outlive your Social Security benefit. The higher returns-to-waiting is why so many experts now recommend retirees pull in an income from part-time work or draw on their retirement savings first to make it practical to delay filing for a few extra years, at least.

Safo: Although, claiming early is the right choice for some people.

Farrell: Absolutely. This is very important. The ability to file early is vital to the Social Security safety net. A big reason to file early is bad health. People may, if they have to quit their job to care for elderly parents. The core of the when-to-claim issue is how best to frame the discussion to help people make smart choices.

Farrell: I’ve been at conferences — that is pre-COVID — where economists steeped in Social Security have called for better framing. Here’s the basic idea: The standard advice often starts with the earliest you can file — age 62. The conversation ends by noting you can delay up to age 70. Why not reverse the discussion and begin with the financial gains to waiting and end by noting that you can file earlier if needed? Same information, different framing and, perhaps, a different claiming outcome.

Safo: OK, but the Social Security trust funds are projected to be depleted in 2034. Isn’t that an argument for filing early if you qualify?

Farrell: Looking at, say, Pew Research polling over the years, a majority of people – Democrats and Republicans – like Social Security. The funding deficit is easy to fix in economic terms. The politics are difficult. My guess, and the best judgment of many Social Security experts, is considering how critical Social Security is to financial security in old age, Congress will restore the system’s financial health — probably at the last minute.