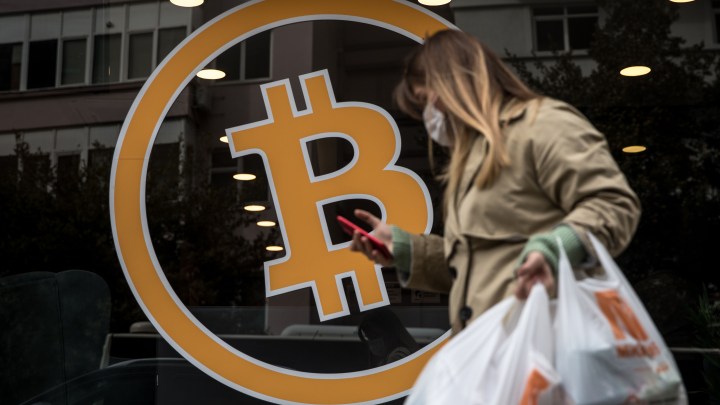 COPY
​For some people, cryptocurrencies are like gold — a place to store and protect your money. Above, a woman walks past a cryptocurrency exchange in April 2021. Chris McGrath via Getty Images

​For some people, cryptocurrencies are like gold — a place to store and protect your money. Above, a woman walks past a cryptocurrency exchange in April 2021. Chris McGrath via Getty Images
Listen Now

After we learned more about the Federal Reserve’s increasingly hawkish intentions to raise interest rates this year in part to control inflation, the NASDAQ fell more than 3% on Wednesday and the S&P fell almost 2%.

​For some people, cryptocurrencies are like gold — a place to store and protect your money.

“As hedge against inflation,” said Christopher Vecchio, a senior strategist with Daily FX.

On Wednesday, we learned that the Fed was getting ready to be pretty aggressive in fighting inflation.

“Well, with expected inflation measures falling, if that is one of the reasons people have been investing in cryptocurrency, then there’s less of a need to be long crypto,” Vecchio said.

​So, in that way, cryptocurrency’s been acting like gold, and the price came down. Now, for some people, cryptocurrency isn’t about inflation; it’s really just long-term gambling.

“Most of the value propositions are for things 30 years from now. That means the payoff is long in the future,” said James Angel, a professor of finance at Georgetown University.

But when interest rates suddenly rise in the here and now, long-term bets look less attractive. And in this way, cryptocurrency is acting a lot like those high-flying tech stocks on the NASDAQ. They, too, had big dreams long in the future, and investors got a little tired of the pie in the sky.

Speaking of broken dreams, when the market takes a tumble, it also means “less money for people to play with in the crypto market,” Angel said.

​In fact, when things go sour in the broader market, people will take money out of cryptocurrencies to save themselves, especially when markets are closed.

​So, in that way, cryptocurrency is acting a lot like perhaps the oldest investment — a wad of cash under the mattress for emergencies. 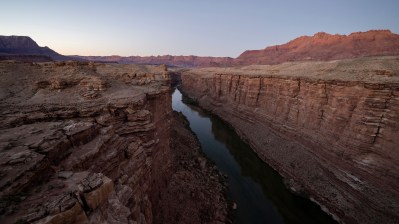