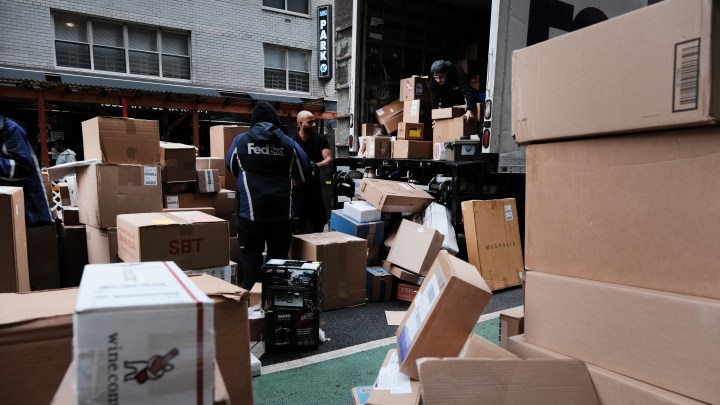 COPY
Packages from a delivery truck are spread on a New York City street. While the U.S. is near the top in inflation, it's first among nations in spending on goods. Spencer Platt via Getty Images

Packages from a delivery truck are spread on a New York City street. While the U.S. is near the top in inflation, it's first among nations in spending on goods. Spencer Platt via Getty Images
Listen Now

The U.S. is experiencing one of the world’s biggest waves of rising prices. But we’re not the only nation feeling the pain.

Case in point: Thursday, the Bank of England increased interest rates to combat a surge in inflation. It’s the first major central bank to do so.

When it comes to higher prices at the gas pump or grocery store, “we’re not an island. We’ve got plenty of company,” said Drew DeSilver, a senior writer at Pew Research Center who has been researching global inflation during the pandemic.

He said that the majority of the 46 nations he’s followed are experiencing it, and one-third have seen rates increase more than 2 percentage points.

There are common forces behind the rising costs: global oil prices, pandemic supply chain problems and the way the virus has changed spending habits.

Shutdowns, for example, pushed people toward spending on goods instead of services, according to Josh Bivens at the Economic Policy Institute.

“And that really exacerbated the supply-demand mismatch in that sector with the supply chain snarls,” Bivens said.

The U.S. is third on the inflation list after Brazil and Turkey, but they have unique political and economic climates.

Demand for goods is exceptionally high, said Adam Posen at the Peterson Institute for International Economics. “We tend to consume more and import more than most other even wealthy economies,” he said.

And by “more,” he means the most. He said the U.S. accounts for one-quarter of global spending on goods.

Also, the U.S. had an unusual pandemic labor market. For instance, when businesses shut down in 2020, many European countries largely subsidized payrolls and people kept their jobs. Posen said that instead, the U.S. paid for unemployment insurance.

“So reopening the economy, that leads to more shortages of workers, more upward push in wages and more disruption,” he said.

Supply chain problems are starting to ease, according to Bivens at the Economic Policy Institute. But there’s one global commonality that could threaten the improvement: COVID variants.

“And those aren’t things that, you know, monetary policy hits too well. It’s not too much even fiscal policy can hit,” Bivens said.

So here’s yet another story that ends with us telling you something you likely already know: The virus is still directing the economy.