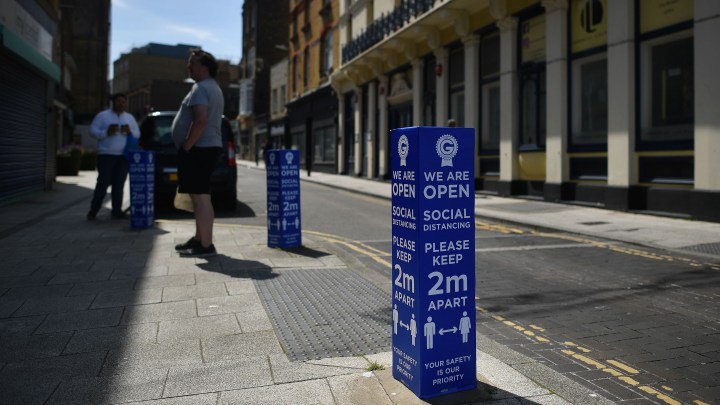 COPY
Government furlough programs and business loan and grant schemes allowed U.K. companies to keep their staff on their payrolls even if their doors were shut. Ben Stansall/AFP via Getty Images
COVID & Unemployment

Government furlough programs and business loan and grant schemes allowed U.K. companies to keep their staff on their payrolls even if their doors were shut. Ben Stansall/AFP via Getty Images
Listen Now

In the U.S., the number of Americans without a job jumped to more than 20 million in April after COVID-19 forced businesses to close as whole industries came to a standstill.

In the months since, some jobs have been added back to the U.S. economy, though the unemployment rate, at 11%, is still far higher than it was pre-crisis.

But not every country has dealt with the same problem. The United Kingdom has been able to keep its unemployment rate from skyrocketing during the crisis.

That’s because government furlough programs and business loan and grant schemes allowed companies to keep their staffs on their payrolls even if their doors were shut.

Back in March, when the coronavirus pandemic forced British shops, restaurants and pubs to close, the government stepped in with unprecedented support.

It announced billions of dollars in loans and grants for businesses and self-employed workers and allowed companies to apply for a furlough program that would cover 80% of an employee’s wages.

Nermine George, owner of the Le Chalet cafe in the northern English city of Leeds, said those programs were essential for her business’ survival.

“To allow us to pay the staff with the furlough was really a huge help,” George said. “It was vital for their own survival, and for us as a company we have the same staff. So when we start again, our training is only on the new procedures.”

She was able to retain all her staff, but she’s not out of the woods yet.

The cost of these programs, according to the U.K.’s Office of Budget Responsibility, is set to cost the government more than $371 billion this fiscal year.

To try and limit ballooning debt, in August the government will taper its contribution to the job-retention scheme and ask employers to contribute a bigger share of the 80% salary coverage. Starting in August, employers will pay National Insurance and pension contributions, and from September, they’ll have to pay 10% of their furloughed employees’ salaries. By October, that rises to 20%.

To accommodate the change, George is weighing the need to reduce working hours for her employees.

“The staff are very supporting,” she said. “And, actually, I get messages thanking us for doing it for us. And I say, ‘It’s the government helping us more than me.’ But I’m trying to work smartly to make everything work together.”

But with more financial responsibility shifting to employers, Tony Wilson, director of the Institute for Employment Studies, said that could lead to more layoffs as businesses try to cut costs later on. He said job losses could total 4 million or 5 million by early next year.

“I think the government is going to have to shift to helping people out of jobs finding new jobs, retraining to help people find jobs in growing industries, investment in giving people the tools to look for work, prepare for work and apply for new jobs,” Wilson said.

For George, it’s one day at a time.

For now, she and her team are keeping busy with local afternoon tea and deli deliveries until, as she says, the cafe can come back with a big bang.