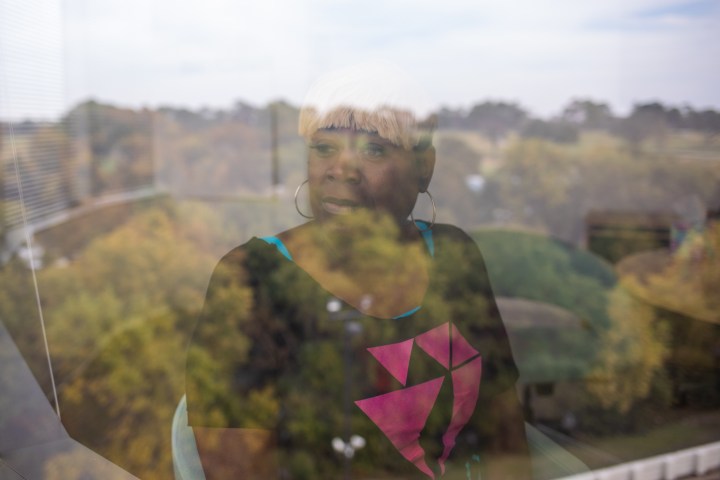 COPY
Patricia Manning and the other nine women help each other out with rides to class, study groups and moral support. "I tell them all the time: We're going to get this," she said. "I say: We pray enough, we believe in each other, we believe in ourselves. I say: 'We got this.'" Keren Carrión/KERA News

Patricia Manning and the other nine women help each other out with rides to class, study groups and moral support. "I tell them all the time: We're going to get this," she said. "I say: We pray enough, we believe in each other, we believe in ourselves. I say: 'We got this.'" Keren Carrión/KERA News
Listen Now

Patricia Manning said she wasn’t tech savvy when she agreed to join a pilot program to learn entry-level IT skills.

“Listen, I didn’t even know how to [turn] the computer on,” she said. “I had an iPhone that I got when I came home, and I didn’t know how to work it.”

But she quit her two fast-food jobs and signed up anyway. Most of the 10 women in this class weren’t terribly techy, either.

Now, six weeks in, the mother of five and grandmother to 11 said she knows how to take apart a computer and map its components.

“We actually were able to take it apart and know what it was,” she said. “That was exciting.”

Manning said she has not had it easy since she came home from prison two years ago.

She said she hasn’t been able to rent an apartment of her own because landlords aren’t willing to rent to someone with a felony drug conviction. So she lives with one of her adult children, and cares for two kids under 18.

When the tech program started in October, she was making $13 an hour. Neither of her jobs offered benefits.

Now, she’s being paid as part of the training program to learn entry-level IT skills.

The tech training pilot program is a partnership between the Dallas nonprofit Girls Embracing Mothers and CompTIA, an IT trade association that offers tech industry training certifications.

The program also offers the participants training on financial literacy, and “soft skills” around working in an office environment.

A 2019 study by the Prison Policy Institute found that the unemployment rate for people who were once incarcerated is nearly five times higher than it is for other workers. The group also found formerly incarcerated people were almost 10 times more likely to be homeless than the general population.

“We cannot keep rescuing people from prison, and restoring them to poverty,” said Brittany K. Barnett, a Dallas-based lawyer and advocate who founded Girls Embracing Mothers.

The number of women behind bars in the U.S. has ballooned in recent decades. Texas incarcerates more women than any other state; Oklahoma has the highest female incarceration rate. In Texas, an estimated 81% of women in state prisons are mothers.

“There’s so much genius behind bars, there’s so much untapped potential,” Barnett said. “And it’s true ingenuity that America needs to thrive, that people are unfortunately overlooking.”

The tech training offers a way for women to boost their salary potential.

A 2019 report by the labor market research firm Burning Glass Technologies identified the CompTIA A+ certificate as one of the 10 most in-demand certifications on job listings across all industries. Typical salaries for workers with that certification are about $43,000 per year, according to the report.

It’s not just the higher wages that excite Patricia Manning, but the opportunity to land a job with a 401k, paid time off and health care coverage. She is currently uninsured and said it has been trying to figure out how to pay for braces for her 15-year-old son.