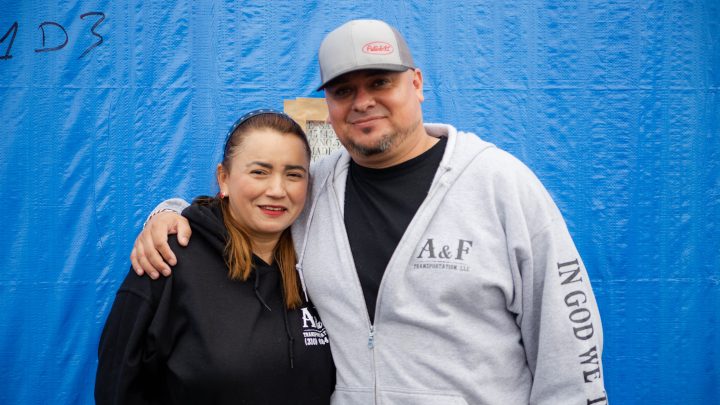 COPY
Francia and Antonio Cortez own A&F Transportation, a short-haul trucking company. A&F is one small part of a complex system that moves goods around the world. Richard Cunningham/Marketplace
Temporarily Unavailable

Francia and Antonio Cortez own A&F Transportation, a short-haul trucking company. A&F is one small part of a complex system that moves goods around the world. Richard Cunningham/Marketplace
Listen Now

In a dirt parking lot in Wilmington, California, just blocks away from the Port of Long Beach, Antonio Cortez oversees a team loading freight onto the back of a semitruck.

Cortez and his wife, Francia — both former truckers themselves — own a company called A&F Transportation. It’s one of close to 1,000 in the Los Angeles-Long Beach area doing something called drayage.

“We pick up containers from the port and bring them to the warehouse or wherever they’re going to be offloaded,” Cortez said. “That is drayage.”

About 40% of U.S. container imports arrive through the ports of LA and Long Beach. But before those containers head to their final destinations, specialized truckers like those employed by A&F Transportation need to bring them out of the port complex.

It’s a critical link between you and the stuff you buy. But despite high demand for A&F’s services as imports surge, Antonio Cortez said this year has been challenging for the company.

“It’s harder and harder every day to get a container out of the port,” he said. “There’s a lot more business out there to go get, but I can’t get it.”

As part of “Temporarily Unavailable,” our series about how stuff moves — or doesn’t move — around the world, Ryssdal spoke with Cortez about the issues his company is facing.

There’s more to the story than “not enough truck drivers”

In news stories and comments from port officials, a nationwide shortage of truck drivers has been offered as a partial explanation for America’s shipping woes. But the “shortage” is nuanced.

For A&F Transportation, which has nine trucks in its fleet, the biggest problem is inefficiency in the system, not a shortage of drivers.

“Because the ports are backed up, they’re slower than usual and I can’t get as many loads out with the nine drivers as I used to,” Cortez said.

In Facebook groups where people in the drayage industry share information, drivers complain about long wait times at the marine terminals where they pick up and drop off cargo. “6 hours later,” one driver wrote in October while sitting in bumper-to-bumper truck traffic at a Long Beach marine terminal. “Been sitting in [Long Beach Container Terminal] for 3 hours,” wrote another.

Since A&F Transportation’s drivers typically make several trips in and out of the port complex during the day, Cortez said, unpredictable wait times can throw off an entire day’s schedule.

Cortez said hiring one or two more drivers would make his life easier, but it wouldn’t fix the underlying problem. “I can’t find any right now, so in theory, yes, there is a driver shortage, but if the ports were working like they worked before, we could do with the drivers we have now,” he said.

Empty containers are a big problem

Because the U.S. imports more than it exports, about 60% of containers leave major U.S. ports empty. According to a MarketWatch analysis, that number is up 46.2% from 2020.

But A&F Transportation and other carriers say it’s become difficult to find return locations and get appointments to return empty containers.

“For example, we have two containers here in our yard that have been here for about two months,” said Pamela Cortez, Antonio and Francia’s daughter, who recently joined the family business as part of the dispatch team. “Depending on the steamship line, there are usually no return locations.”

Industry insiders say the problem comes down to a lack of storage space at marine terminals due to a massive increase in imports during the pandemic.

According to new data from the National Retail Federation and Hackett Associates, 2021 retail imports are expected to be 18% higher than 2020’s, despite supply chain challenges.

That could impact consumer prices downstream

Steamship lines typically give carriers five days to return empty containers. After that, they’re charged a per diem fee until the container is returned.

A&F said it has received stacks of invoices for per diem charges on containers it physically can’t return due to a lack of appointments. Those charges increase freight costs for A&F’s customers, which, ultimately, could impact the prices consumers pay.

“We have to contact the customers and say, ‘Hey, you need to help us out with either trying to dispute it or agree to paying the charges,’” Pamela Cortez said.

On the import side, there’s another set of charges called demurrage fees for containers that aren’t picked up fast enough.

“We can’t make appointments to pick them up, and then that causes them to be ‘on demurrage,’ which the customers have to pay,” Pamela said.

In October, a record 46.9% of containers arriving at the ports of LA and Long Beach waited more than five days for pickup via truck.

“A lot of people maybe don’t understand and say, ‘The truckers just don’t want to get the containers out,’ but it’s not that easy,” Antonio Cortez said. “There’s a limit to what I can do … because I [only] have so many trucks, so much equipment, so much land,” he said.

“That must make you crazy,” Ryssdal said.

“Yeah, it does,” Cortez responded.