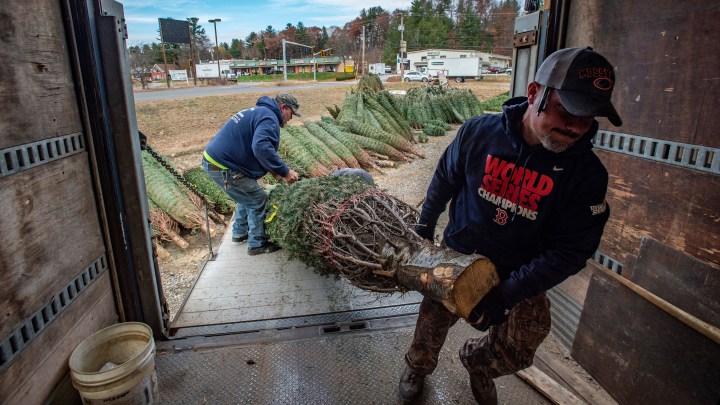 COPY
A Christmas tree is loaded into a truck on Nov. 21. Christmas trees quantities are lower this year as a result of extreme heat and cutbacks in planting during the Great Recession. Joseph Prezioso/AFP via Getty Images
A Warmer World

A Christmas tree is loaded into a truck on Nov. 21. Christmas trees quantities are lower this year as a result of extreme heat and cutbacks in planting during the Great Recession. Joseph Prezioso/AFP via Getty Images
Listen Now

It’s Thanksgiving week, which means people are starting to go out and buy Christmas trees to put up.

But — as with so many things this year — those trees are likely to be more expensive.

In late June, when that heat dome descended on the Pacific Northwest, the temperature hit 115 degrees Fahrenheit at Chal Landgren’s Christmas tree farm in northern Oregon. For three days in a row.

“Our little farm was in one of the hottest areas in the state, and we lost most of our 7- to 8-foot noble firs,” Landgren said, who also works as a Christmas tree specialist at the Oregon State University Extension.

Noble firs are some of the most popular Christmas trees. Landgren would have been selling the ones he lost right about now.

The extreme heat damaged about 10% of the mature Christmas trees in the Pacific Northwest this summer, according to Doug Hundley, a seasonal spokesperson at the National Christmas Tree Association.

Another reason supply is tight, he said, is that Christmas trees take 7 to 10 years to grow. A decade ago, during the Great Recession, a lot of growers ended up with too many trees they couldn’t sell. So, they pulled back.

“People weren’t replanting trees as fast as they now wish they had, so we’ve just got a limited supply,” Hundley said.

Still, anyone who wants a tree should be able to get one, he said. But it will cost 5% or 10% more than it did last year.

The trees that were hit hardest by this summer’s extreme heat were seedlings — about 70% of them died. “It was really bad. You can drive by fields and fields of burned-up seedlings.”

It’s one thing, Norby said, if that happens for one year. Growers can find ways to make up for lost trees. But if climate change makes that kind of extreme heat more common “and we have another heat dome that hits seedlings right in their peak growing cycle,” then there will be serious Christmas tree shortages.