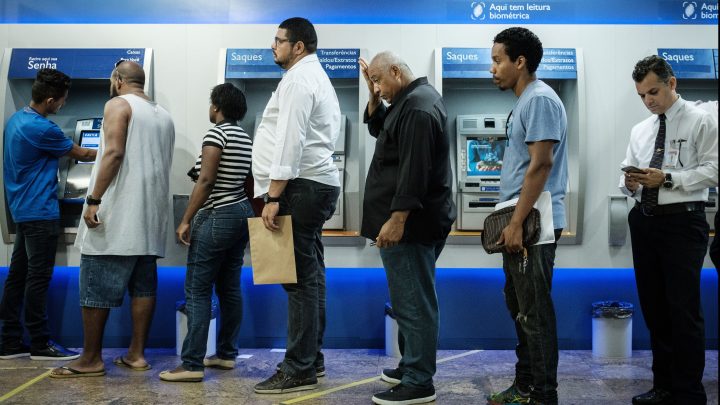 COPY
According to logistics expert Keely Croxton, the mathematical formulas that explain wait times at an ATM can be applied to global supply chains. Yasuyoshi Chiba/AFP via Getty Images
Temporarily Unavailable

According to logistics expert Keely Croxton, the mathematical formulas that explain wait times at an ATM can be applied to global supply chains. Yasuyoshi Chiba/AFP via Getty Images
Listen Now

One month after the Joe Biden administration announced a plan to ease supply chain congestion by opening the Port of Los Angeles 24/7, there is still a record backlog of container ships off the coast of Southern California, waiting for a spot to unload. Plus, the average wait time for a ship arriving at the Port of Los Angeles has reached 17.7 days.

In response to a listener request, “Marketplace” host Kai Ryssdal spoke with Keely Croxton, a professor of logistics at Ohio State University about how “queuing theory” — the mathematical study of waiting lines — helps explain ongoing supply chain issues. The following is an edited transcript of their conversation.

Kai Ryssdal: For the uninitiated, which I’m going to guess is most of us, give us a basic sketch of queuing theory.

Keely Croxton: Yeah, queueing theory is basically used to predict the expected behavior of any system where things arrive, they get serviced and then they leave. So, for you and me in our everyday lives, we can think of places like walking into the grocery store or a doctor’s office or a restaurant, and if we have data, we can use some fancy math to predict how long the line will get. And then we can flip that problem around, for example, if I want to figure out how many cashiers I need at the grocery store, I can use queueing theory as a way to mathematically calculate the number of cashiers that I would want to keep my lines at an acceptable level.

Ryssdal: When people first started studying lines, which is fundamentally what this is, what did they learn? Was there like an aha! moment?

Croxton: I think, for me at least — my aha! moment when I was learning all this stuff — is the role of variability in all of this. When things are operating close to an average, queues don’t develop and utilization rates are fine. The example I give to my students is if you want to set up an ATM machine and on average someone’s arriving every three minutes, and the average processing time is two and a half minutes, it would seem like there shouldn’t be any waiting, right? Because your processing time is less than your arrival time. But the problem is that there’s variability in that. We’ve all been behind that person at the ATM machine that fumbles for their card, and needs to look up their PIN, and wants to do five different transactions, [and] it’s the variability that really starts to drive lines.

Ryssdal: Yeah, setting aside for a second the fact that I’m always behind the guy who’s refinancing his mortgage at the ATM machine, it seems to me that it’s a single-node problem, right?

Ryssdal: Good. You know where I’m going with this. Global supply is a bajillion-node problem. So, how can we think about it in terms of queueing theory?

Croxton: Yeah, well, we can extend queueing theory to think about, for example, the port. You know, think of it as a cashier at the grocery store. These ships arrive, they need to be processed, and then they leave. And so we can use queueing [theory] to make the same kinds of predictions about what capacity we need, or how long the ships will have to wait. But you’re right. It’s not just what happens at the port. The supply chains are really long, and so when you’ve got things happening all along that supply chain, that’s creating this variability that I think is a part of the problem.

Ryssdal: Just on that variability thing, how important is it to be able to adapt when systems are running at close to full capacity before they get stressed? Like, I imagined our port operations in this country were running pretty close to capacity before the pandemic, and now they’ve got this huge burst that they can’t handle.

Croxton: Yeah. So we can learn from queueing theory is exactly what you were just suggesting — that the higher the average utilization rate of our system, the longer the wait times and the more brittle the system is. These ports were already working pretty close to full utilization, which just makes them unable to handle not only the change in variability of that processing time, but also a sharp increase in simply the arrival rates.

Croxton: Retail demand is up something like 30% over 2019, and there’s 20% more ships arriving at these ports, and it just is really creating a system that is just designed to snap.

Ryssdal: One of the things I’ve been saying when people ask me, you know, “How much longer is this going to take?” I say, “Look, the more backed up it gets, the more backed up it’s going to get,” because there’s a finite output from the port, no matter how many ships you get in there. So, I’m going to turn around to you, the professional, and say, “How much longer is this gonna last?”

Croxton: Well, I mean, the good news is they’re starting to see some relief. I just saw a report that there’s more capacity downstream from the port, but we’ve got the Christmas rush coming in, and so it is going to take certainly through the holidays, and I think well into 2022 — maybe even the end of 2022 — before we see a return to what most of us in the field would think of as normal supply chain operations. When retail demand is up 30%, we’re just asking a lot of this very constrained system.

If you’ve got a supply chain question for “Marketplace,” ask using the form below. 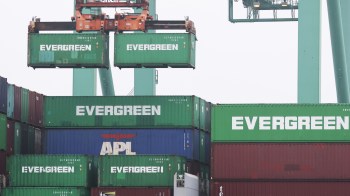