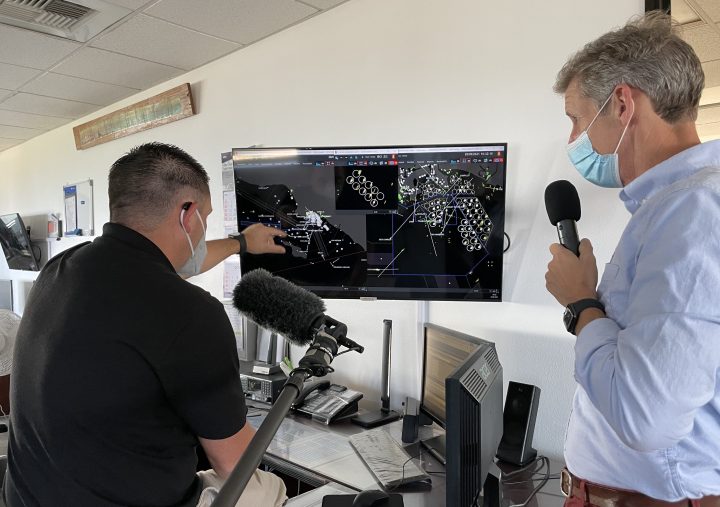 On a Tuesday in September, India Hynes, the CEO of a wine cooler and luxury appliance company called Vinotemp, said she had 25 shipping containers‘ worth of product sitting at factories in China while several of her top-selling items were listed as “out of stock.”

That same day, an unprecedented backlog of container ships floated off the coast of Southern California, waiting to unload cargo at the ports of Los Angeles and Long Beach.

“There’s nothing I can do, really,” Hynes said.

It’s been nearly two years since the beginning of pandemic lockdowns in China, but global supply chains are still tangled up. So in a new series called “Temporarily Unavailable,” “Marketplace” host Kai Ryssdal will take a closer look at how stuff gets around the world.

Click the audio player above to hear the first segment, or keep scrolling to see four charts that will help you understand why everything is out of stock.

In 2020 and 2021, pandemic shutdowns, labor shortages and other disruptions slowed parts of the shipping and logistics industry at the same time imports surged due to shifting consumer spending habits.

“Pretty much every link in the supply chain has had serious challenges at one time or another,” said Phil Levy, chief economist with freight forwarder Flexport.

One example is air freight. “Traditionally, half of air freight has traveled in the bellies of passenger planes, not in dedicated cargo planes,” said Levy. “When countries had shutdowns and people stopped doing business travel, all of a sudden you lost a lot of air cargo capacity.”

Other examples include the Suez Canal blockage, a temporary shutdown at one of China’s busiest trading ports, limited warehouse capacity and an ongoing shortage of truck drivers.

“And all of that is happening at a time of really elevated goods demand,” Levy said. “So there’s no slack in the system, there’s no reprieve where you catch up.”

Dozens of container ships are stuck outside Southern California ports

About 4,500 ships, carrying a third of U.S. container imports, come through the ports of Los Angeles and Long Beach every year.

“In normal times, they’re hitting their arrival time within 30 minutes,” said Kip Louttit, executive director of the Marine Exchange of Southern California, which assembles schedule data for the port complex.

Fall is typically the ports’ busiest time as companies try to build up inventory for the holiday shopping season, but this year has been unlike any other.

The number of ships at anchor or drifting outside the Los Angeles and Long Beach port complex hit an all-time high of 73 in mid-September.

“In a normal world, mathematically, there are supposed to be zero or one container ships at anchor,” Louttit said. “So that’s the magnitude of the backup.”

The average anchorage time at the Port of Los Angeles has stretched to more than 11 days in a 30-day rolling average, but other parts of the supply chain have slowed as well.

“Ships, trucks, trains, warehouses — all of them are essentially part of each other's operations, more or less, because we're all dependent on each other in order to succeed,” said Matt Schrap, CEO of the Harbor Trucking Association, which represents the industry that moves containers to and from ports. “It's like a spiderweb, right? You tug one end and the whole thing shakes.”

The average transit time for a shipment from Shanghai to reach its final destination in the U.S. is more than double what it was before the pandemic, according to freight forwarder Flexport.

In July, Union Pacific Railroad temporarily suspended service from West Coast ports to terminals near Chicago in an attempt to relieve congestion.

“And for the whole thing to work, you have to be able to go from start to finish,” said Flexport’s Levy.

Schrap said the amount of cargo piling up on docks has made it difficult for truckers to return empty containers to the ports and reduced the capacity of the entire system.

“There’s only so much room to go around,” he said. “We're storing a lot of empty containers in our yards because we don't have the ability to return them ... which unfortunately, is taking up chassis capacity where we are unable to utilize those wheels, as we call them, in other parts of the supply chain.”

Empty containers take nearly twice as long to return to China as they did before the pandemic, according to data from Flexport.

The average price to ship a 40-foot container from China to the North American West Coast reached $20,000 in September, according to Freightos’ index.

“Are you raising prices at all?” Ryssdal asked Hynes. “Oh yes, absolutely,” she responded.