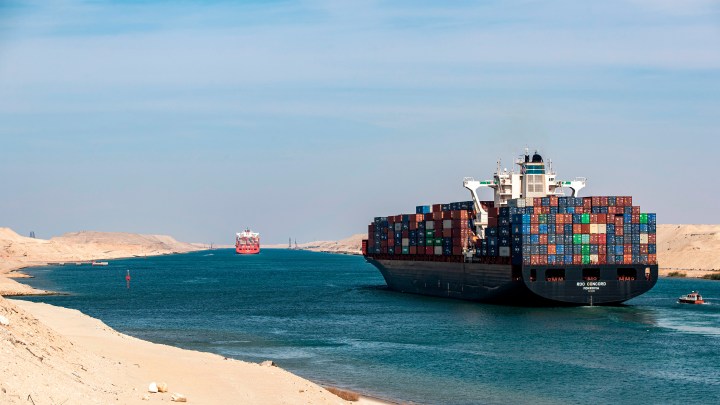 A 1,300-foot-long, 200-foot-wide container ship stuck in the middle of the Suez Canal has brought one of the world’s busiest trade routes to a stop. Efforts to move the enormous ship, the Ever Given, have so far been in vain.

What might this mean for the global supply chain?

“Marketplace” host Kai Ryssdal put the question to Christine McDaniel, a senior research fellow at the Mercatus Center at George Mason University. The following is an edited transcript of their conversation.

Kai Ryssdal: I have to tell you, the first thing I thought when I saw the pictures of this ship turned sideways in the canal — other than “How the heck did that happen?” — was, “Wow, the global supply chain is really, really fragile if this can block up a major artery.”

Christine McDaniel: Yes, it is fragile. There’s lots of moving parts. But remember, the global shipping industry logistics are used to supply shocks, demand shocks, weather-related, war-related. It’s nothing they haven’t dealt with before.

Ryssdal: Fair enough. But if you are a tanker company looking at this traffic jam in the Suez Canal, how long are you going to wait and let your extremely valuable ships sit there in the backlog before you go around down the south of Africa and go the long way around?

McDaniel: Economists — especially trade economists — have spent some time trying to calculate how much time costs in international trade. A couple of economists estimated that each additional delay of shipping is equivalent to about a half a percent to up to 2% of a tariff. And then of course, this is cascading, because it’s not just the stuff on that particular ship that’s delayed, it’s everything else that’s getting delayed because of that.

Ryssdal: Yeah, the issue here is downstream, right? I think this ship was supposed to go to Rotterdam, and you have to believe there’s a bunch of companies in Rotterdam or elsewhere in Europe saying: “Where’s my boat?”

McDaniel: Right, right, just about everything that gets made, you know, crosses at least a few borders. It’s not just a particular component that might go into a car radio. That car cannot be shipped until that car radio has all the components and is ready to go.

Ryssdal: That gets me back to where I started. And you didn’t much care for the question, right, about fragility, so let me rephrase it. It’s a little bit tenuous, sometimes, the global supply chain. Is that a more fair characterization?

McDaniel: Yeah, but I think it always has been. As manufacturers and producers try to decrease costs with just-in-time manufacturing [and] increased specialization, then, yeah, every time there’s a glitch there’s going to be much bigger effects than we would have felt, say, 25 years ago when products weren’t scattered so much across borders.