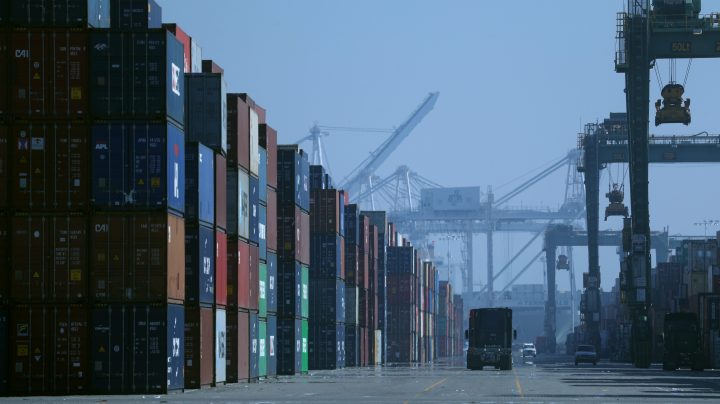 COPY
Stacks of shipping containers at the Port of Oakland in California. "Containers aren't unloaded at the port level, and the factories are hesitant to produce," laments India Hynes, CEO of Vinotemp. Justin Sullivan via Getty Images
Temporarily Unavailable

Stacks of shipping containers at the Port of Oakland in California. "Containers aren't unloaded at the port level, and the factories are hesitant to produce," laments India Hynes, CEO of Vinotemp. Justin Sullivan via Getty Images
Listen Now

Congestion in global shipping has led to product shortages and increased freight costs.

The cost of shipping a container from China to the West Coast of North America has quadrupled since the beginning of the year, while the average transit time for goods to reach their final destinations has stretched to more than 70 days, according to data from online freight marketplace Freightos.

India Hynes, president and CEO of Vinotemp, which imports wine coolers, outdoor refrigerators and other appliances, spoke with “Marketplace” host Kai Ryssdal four months ago about the supply chain challenges plaguing her company. Now, as retailers gear up for the holiday shopping season, she told Ryssdal that those problems are even worse.

The following is an edited transcript of their conversation this week about the difficulties of acquiring inventory.

Kai Ryssdal: So, here’s what I’m gonna do. I’m gonna do a little mock shopping trip to vinotemp.com. I’m looking at Garage 300-bottle Dual-Zone Wine Cooler, which is for sale for $3,399 and a $625 shipping cost. But then right below that, it says, “This item is currently out of stock.”

Ryssdal: How big a problem is that for you, as the woman trying to sell this particular piece of equipment?

Hynes: It’s pretty bad because that particular unit is one of our top 10 models, and not having it is, I mean — I look at the daily sales, and it’s significantly hurting our daily batches.

Ryssdal: Why is it out of stock?

Hynes: Because the factory has several containers waiting to ship and they cannot get space on vessels. Or if they do get space, if we basically pay, like, $19,000 [to] 20,000 a container, they will try and find space, but still no guarantees.

Hynes: Pretty much, yes. That’s how it works.

Ryssdal: So what do you do? Seriously?

Hynes: Well, we have about 25 containers waiting now to ship. The products that are the hot, hot-selling ones are the ones that we’re pushing out if there’s a spot here or a spot there. They’re getting those spots if they don’t get canceled because sometimes we’ll book those containers, and then we’ll get a call that we can’t get it for whatever reason — either they gave it to somebody else, maybe somebody else who’s paying more money for it. So it’s a tough situation right now. There’s nothing I can do, really.

Ryssdal: Are you raising prices at all?

Ryssdal: When was the last time you actually got a container from China? Do you remember?

Hynes: Oh, yeah, I mean, we get dribs and drabs. So, we got one yesterday for a product we’ve been out of stock of for a month, and I’m not sure when the next one’s coming in. I heard it’s not getting any better anytime soon. We’ve got containers at the port that’s now bottlenecked and causing an extra three-week delay — because containers aren’t unloaded at the port level, and the factories are hesitant to produce because they’ve got containers that are stuck in their facilities.

Ryssdal: Is this driving you at all to consider another source for your manufacturing? Would you onshore it? Or does that just not make economic, business-model sense for you?

Hynes: It’s funny you say that because one of my biggest customers asked me, “Can you start making these wine coolers in the U.S.?” However, all the components come from overseas. We do some manufacturing in Vegas. The components come from different [places], and a lot of them from overseas, so we’re still in that situation, even with the stuff we assemble in the U.S.