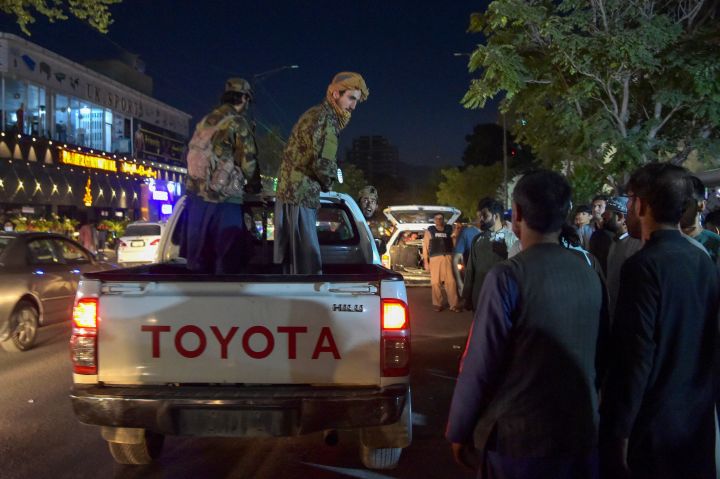 What the Taliban takeover means for Toyota

COPY
Taliban fighters in a Toyota pickup in Kabul last week, one of many images showing the Taliban's fondness for the vehicles. But the brand's strength, says Utpal Dholakia, means "it is insulated against negative publicity over which it has no control." Wakil Kohsar/AFP via Getty Images

What the Taliban takeover means for Toyota

Taliban fighters in a Toyota pickup in Kabul last week, one of many images showing the Taliban's fondness for the vehicles. But the brand's strength, says Utpal Dholakia, means "it is insulated against negative publicity over which it has no control." Wakil Kohsar/AFP via Getty Images
Listen Now

Among the images coming out of Afghanistan in the past couple of weeks were those of Taliban fighters roaming the streets in Toyota pickup trucks.

Toyota trucks and SUVs have been popular with the Taliban and other militant groups for decades, so “Marketplace” host Kai Ryssdal spoke with Utpal Dholakia, a professor of marketing at Rice University, about what the political transition in Afghanistan might mean for the automaker’s brand. The following is an edited transcript of their conversation:

Kai Ryssdal: So if I’m a brand manager at Toyota, and I see all these pictures on cable news of Taliban running around in my [vehicles], how worried am I?

Ryssdal: Is this one of those, you know, the only bad publicity is no publicity? Is that where we are?

Dholakia: So let’s talk a little bit about negative product placement. This is a situation when the brand really has no control over who uses it and how they use it. Toyota is a pretty rich brand with a lot of positive associations and a huge base of loyal customers. So in some sense, it is insulated against some negative publicity over which it has no control.

Ryssdal: Are there other examples? I mean, Toyota is obviously, you know, top of mind because of the Taliban, but there have to be others out there.

Dholakia: Yes. For example, Osama bin Laden had a great fondness for Coca-Cola. And then there was this really interesting story of this Norwegian mass murderer who preferred to wear Lacoste shirts when he was in the courtroom. The list goes on and on.

Ryssdal: Is there a tipping point where consumers actually do click in and say, you know what? I saw X, Y, Z, so I’m not going to buy that product?

Dholakia: One example is Gab, and then another one is Parler. Both these social media platforms were kind of started with the idea of freedom of speech and allowing people to say whatever they wanted to say. And then these platforms come to be associated with things like conspiracy theories and insurrections and things like this. This is where you can argue that the brand is much more closely associated with things that it can control, you know?

Ryssdal: Yeah. So back to our starting example, with Toyota. I mean, Toyota took some steps to try to make sure that new vehicles were not getting into Taliban’s hands, right? Do companies have a responsibility to be proactive when they see this stuff?

Dholakia: They have a responsibility to be proactive, for sure. But there’s only so much they can do, you know. So a lot of the actions that are taken because of its association with the Taliban is to do things like prevent the sale of new trucks for one year after someone buys it in Japan. To my mind, at least, this is more symbolic than substantial. You know, it creates this image that Toyota is doing something about it, but the question is, how much can a brand really do?

Dholakia: Exactly. So they try to do small things which are clearly communicating where they stand.

Ryssdal: Did Coca-Cola or or Lacoste or any of those that are associated with some of the more unsavory characters in recent history, did they suffer at all from those associations?

Dholakia: Not in any measurable way. So again, Lacoste did something, just like Toyota, which is they approached the police and the court authorities to try to get this mass killer to stop wearing their brand. But the effects are negligible. You know, there is something called brand insulation, which is the fact that customers, especially loyal customers, kind of draw upon the goodwill that the brand has created for them, and often [when] adverse events happen like this, customers are willing to give brands the benefit of the doubt.